All characters and bosses in Fortnite Season 2 Chapter 3

Even though the life of all characters in Fortnite Chapter 3 is kind of pointless – they mostly just wander around their spawn location – they can still help out some players. For example, you can unlock all characters in Fortnite Chapter 3 Season 2 collection book, and bosses will always drop a valuable weapon. If they don’t kill you first, that is.

Since the locations of the map and the point of Fortnite NPC characters haven’t changed in Chapter 3 Season 2, we won’t talk about their properties for long – all of them (besides the bosses) still give you a random item when you talk to them for the first time, and you can still purchase something from them. The point of Fortnite bosses is also the same in Chapter 3 – they guard their locations with their cool guns, which you can get for killing the boss. 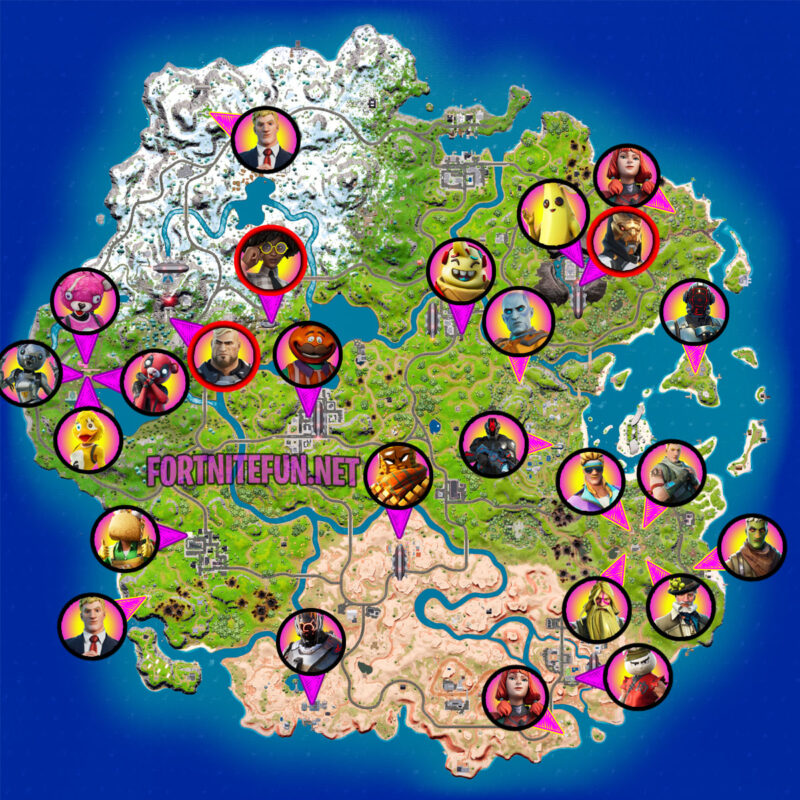 An interesting thing worth noticing: almost all characters in Fortnite Chapter 3 Season 2 sell exotics – guns with special properties and a separate exotic rarity. Yes, almost all of them. It’s probably the biggest amount of exotics since Chapter 2 Season 5.

The Origin is the first character in the collections book. This is because he is a new one in Chapter 3 Season 2. He was featured on some concept arts before, but he only made it to the map now.

The Origin spawns next to Sanctuary. He can sell you a healing item, the exotic Night Hawk pistol and a rift.

Another new character in Chapter 2 Season 3 is The Imagined.

This red-haired member of The Seven can be found in 4 spots on the map (the last one is at the Seven Outpost north from Windbreakers). Obviously, she can’t be in all four spots simultaneously, so you will need to pick a spot to fly to. She sells the exotic Storm Scout sniper rifle, grenades, and offers to hire herself.

The Visitor is a familiar character also featured on the last season’s map.

He’s still in the same spot – at the launch pad, north-east from The Foundation’s statue. He will offer you the exotic Boom sniper rifle, a grenade and a rift.

Since the last season, The Scientist has moved to the southern part of the map and now watches tumbleweeds in a desert.

This peaceful guy sells the exotic Storm Scout sniper rifle, a grenade and can tell you where the next safe zone will be.

Agent Jones joined all characters in Fortnite Chapter 3 again. Being in the new collections book didn’t change anything – he can still be found at 4 spots around the map’s edges.

The offers to hire himself or buy a rift. He also sells the exotic Boom sniper rifle.

The Foundation also hasn’t moved an inch and can still be found at Sanctuary. He wanders around the location, so there’s a chance you will meet him slightly to the north or to the south from the location’s center.

Now, a block of probably the worst characters in Fortnite Chapter 3 starts. All of them are in one spot, so it’s hard to find an exact NPC in that mess. They also spawn randomly, so be patient. Bunker Jonesy is located by a lake, next to a car.

He can offer you fish and a fishing rod, as well as the exotic The Dub shotgun.

Ludwig doesn’t have a 100% spawn chance, so you will have to search for him for a while. He spawns in a house at The Joneses.

He sells healing items, as well as the exotic The Dub double-barrel shotgun.

Braniac also spawns depending on the Moon’s phase – I mean absolutely randomly, so you might have a hard time searching for him. Besides that, the green guy walks around The Joneses’ surroundings, which makes finding him even harder!

He sells the exotic Night Hawk pistol, grenades and offers to hire him.

Mullet Marauder doesn’t have a 100% spawn chance, so you will have to test your luck. He is located in an eastern house at The Joneses.

He sells the exotic The Dub double-barrel shotgun, grenades and healing items.

The last Jones in this pit of randomness is Jonesy the First. He is located in northern house at The Joneses.

He sells the exotic The Dub shotgun, C4, and offers to hire himself.

The random doesn’t stop here, so you will have to endure and keep searching. Cuddle Team Leader is usually in the main building with a flag.

Metal Team Leader may or may not spawn in a house with a gray roof in Camp Cuddle.

Cuddlepool is located in a house with a red roof in Camp Cuddle.

The character is ready to sell you the exotic Shadow Tracker pistol, C4. Also, you can hire her.

Quackling may appear in a house with a yellow roof in Camp Cuddle.

Guaco is located where he always was – in Greasy Grove.

He sells weapons, heal items and offers to find out the next circle of the storm.

Lil’ Whip came out from his restaurant and now stands on the edge of Coney Crossroads location.

Bao Bros, or, more exactly, one brother because there’s no second one nearby, is located in a hotel in Condo Canyon.

He sells weapons and heal items.

Tomatohead is located in Tilted Towers, in the center of location.

He may offer you weapons, rift and heal items in his pizzeria.

Mancake relocated since the last update and now stands in Rocky Reels.

A tasty banana who was eaten by Jonesy once is alive and well on the map of season 2. He’s located in the Daily Bugle.

Gunnar is located in the same place in Command Cavern. And… congratulations, ’cause this is the first boss in the collection book. More exactly, he’s actually not new, but he’s the first in the list of bosses of this season.

To kill him, as they say, aim at the head. But seriously, try to use shelters around and collect ammo and weapons before you go to him. He’s thick skin, and it’s not easy to knock him out.

When you kill Gunnar, you will receive a key card to open the safe and mythic Stinger SMG. In the safe you will find a lot of loot, therefore it’s worth it to kill Gunnar, if you are certain of your powers.

You can find the next boss (the second on the map of the new season) in Daily Bugle. He’s not alone there, so open about a dozen chests before you go there. And don’t forget about maneuver, fans can help with this. The boss can teleport, so keep your eyes open. When you kill him, you will receive the mythic Huntmaster Saber’s Thermal Rifle.

Slone is the last boss on the map of season 2. Well, it’s not hard to guess that she’s located not far from the other two. It seems that they’re all having a party of supervillains, it’s time to thin out their ranks.

Slone is walking around a huge drilling rig in the east from Command Cavern. There are a lot of enemies there, so you need weapons and ammo. Or better get in the tank and start shooting all unwanted.

When you kill the boss, you will receive the mythic Slone’s Striker Burst Rifle and healing items. The drummer is a mythical automatic rifle. Striker is a mythic rifle.