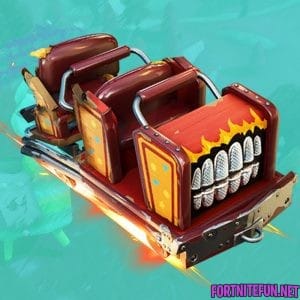 Fortnite Astroworld Cyclone glider comes in the same pack with Travis Scott, but it is not for sale: you were able to get this glider by visiting Travis Scott’s concert at least once, but lots of people got it just by logging into the game. The glider itself s a rollercoaster cart, but all rusty and with huge teeth on the front. This glider’s other feature is that you don’t hold it from below, like most other gliders, but you actually stand on it, just like TNTina’s glider.

You were able to get Fortnite Astroworld Cyclone glider by visiting Travis Scott’s concert at least once.

High-quality images of Fortnite Astroworld Cyclone glider in a PNG format with a transparent background, so that you use them as you see fit (wallpapers, YouTube, etc.):