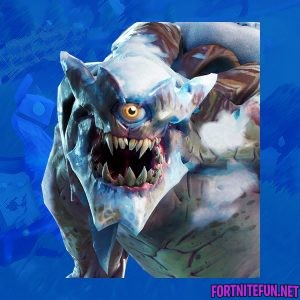 The Devourer outfit is the most beautiful creature that didn’t ruin our island in the Fortnite Season 9. There was a great fight between a pink bear and a formidable monster, in which, obviously, a friendship did not win, but a graciousness.

The Devourer skin like an ordinary monster and has a pose like that of an animal. Nothing strange or surprising, because cyclops are mythical creatures! The Devourer outfit is a part of Polar Legends paid set and it costs real money.

No longer trapped in his icy prison.

High-quality images of The Devourer outfit in a PNG format with a transparent background, so that you use them as you see fit (wallpapers, YouTube, etc.):