Dr.Disrespect once again expressed his dissatisfaction with the game changes that make representatives of Epic Games. According to the streamer, the developers have lost the “thread of the game”, which made the game popular.

Streamer decided to look at passing qualifications for the Fortnight World Championship and was disappointed.

Here is his opinion on qualifications: “I’m trying to watch Tfue slay out during these [Fortnite] qualifiers, but these overrated developers from North Carolina think watching a bunch of blue balls is fun.” 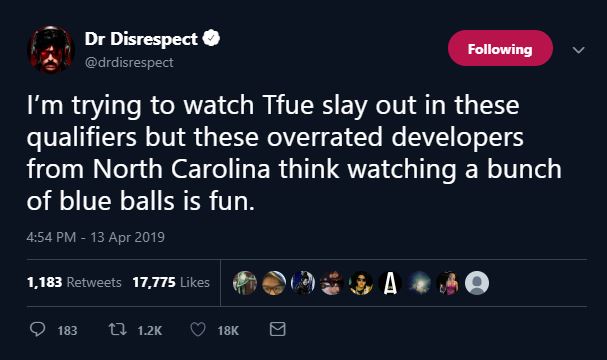 Obviously, Disrespect means sharokhods, which, though weakened in patch 8.3, but transport continues to remain too unbalanced and present even more problems than previously removed aircraft.

Recall Dr. Disrespect has more than 3 million followers on twitch, but will they listen to Epic Games is a big question for him.