Many ask the question: “Why did the Counterattack Bundle  skins appear in the in-game store?”.

Let’s be honest, we were initially surprised too, because these skins were issued to those users who bought NVIDIA video cards on special terms.

But as always, everything turned out to be quite simple. The Counterattack Bundle is exclusive, but the skins that are included in the set had only the status of temporary exclusivity. We were unable to find information at the end of the period of exclusivity, but the following post was published: 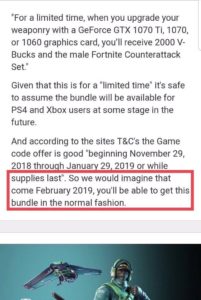 It is worth noting that on the Nvidia website there is no mention of the exclusivity of this set. The GeForce package itself consists of the following items:

And you can get it (set) only for the purchase of a laptop or PC with a GeForce GTX 1070 Ti, GTX 1070 or GTX 1060 video card. The promotion is available until May 22, but we think that this set is no longer so interesting for buyers.