How to play Fortnite on mobile: experience, building, updates

Many PC and console gamers may have asked themselves the question: “How is it to play, build and update Fortnite on a Mobile phone?” Therefore, in this article I will answer all the questions above and tell you how newcomers to mobile gaming can master the mobile version of Fortnite.

As soon as you start Fortnite on your mobile device, the game will immediately prompt you to choose a method of firing a weapon. In the mobile version of Fortnite, there are three such methods: auto-shooting, shooting by touching anywhere, or by pressing a fixed button. I recommend choosing the auto-shooting mode for all those who decided to play the mobile version of Fortnite for the first time. In auto-fire mode, you only need to look at the enemy to start firing your weapon. 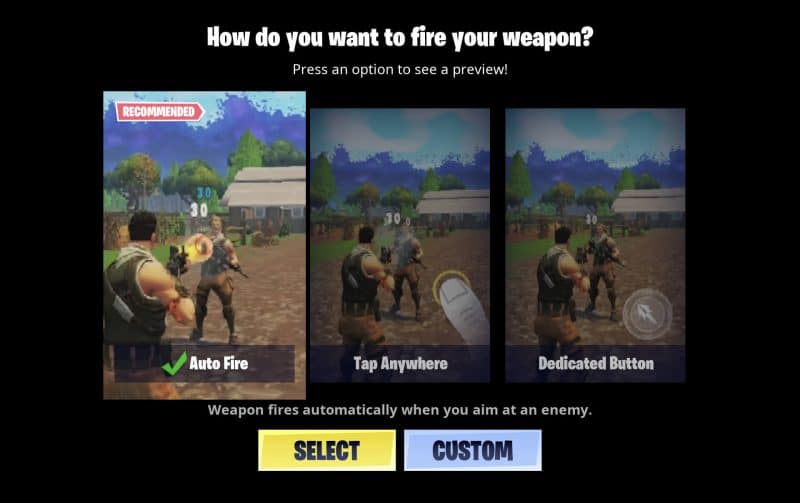 If you have already had experience playing the mobile version of Fortnite, then the “Touch anywhere” mode is suitable for you, since it is designed for players who want more accurate control of shooting, but do not want to aim at specific buttons on the screen. In this mode, you can open fire by touching the screen anywhere.

Well, if you have been playing Fortnite since the beginning of its release on mobile phones, and you know how to control the shooting, then the Fixed button mode is completely suitable for you. This mode was created for players who prefer to have full control over the weapon in their hands. To shoot, just tap the fixed button on the screen of your mobile phone.

Use the layout interface to fully customize Fortnite on your mobile device. You can easily move the interface buttons, resize them, add or remove them.

And if you don’t want to bother with setting, then the mobile version provides several Presets that may suit you. There are 3 presets to choose from:

If you can’t get used to the touch controls in the game, then you can connect a controller. By quickly connecting a controller, you can enjoy the exact same control layout as on consoles.

Building is one of the most challenging aspects for mobile devices, primarily due to the precision of the touch controls. It takes practice to manage them confidently. You need to collect a lot of materials while looting, but make sure that you are completely alone, as destroying things creates a lot of noise and can attract the enemy.

When building, use stronger materials on the outside and wood on the inside to preserve the solid materials. Build walls to protect yourself and place a ramp for shooting. In the endgame, you will most likely face lots of towers or small boxes. If you are playing in a group, it is best to work together: one player shoots at the enemy, while the rest are trying to destroy their buildings.

Starting from season 9, the control of the game was somewhat inconvenient, in connection with which I had to change the interface layout manually several times a season, but soon by season 13 I got used to controlling the game and almost always occupied the top 1 to this day. In my experience, at the beginning of each season, you need to learn each new weapon, since the whole game depends on it. In order to start playing well, you need to choose the preset that suits you, then find an appropriate weapon (for me, it is a Prehistoric assault rifle and a mechanical shotgun), healing items, and building resources, And of course you need to have some kind of skill that comes with time.

Updating the mobile version for different installation methods is carried out in different ways:

But if you downloaded the game in Play Market or App Store, you can’t update the game due to the removal of the game from these stores. Unfortunately, App Store is the only way you can download Fortnite on Apple’s mobile devices, so the game there is no longer updated. If you delete it, you won’t be able to update it anymore.