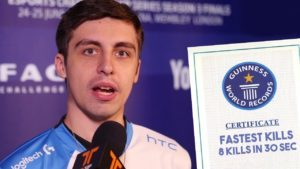 Shroud Fortnite Settings will help not only to adjust your key settings, but also ultimately make your game a little better. After all, Shroud is a professional!

Shroud (Michael Grzesiek) is the most popular PUBG streamer on Twitch. At the moment, no less successfully, plays Fortnite. As more and more streamers go to the Fortnite Battle Royal, then Shroud will most likely join them.

Shroud was a tier 1 in Counter-Strike: Global Offensive player. Together with Cloud9, he participated in several majors and won the fourth season of the ESL Pro League. Like most professional gamers from North America, Michael is often streaming. Mostly Shroud broadcasts matches of closed ladders, and the highlights from its stream did not leave the top forum Reddit.

In 2017, Mike became very interested in another game in the genre of “Battle Royale” – PlayerUnknown’s Battlegrounds and quickly became the top-1 on Twitch, left the professional CSʻa and became the so-called full-time streamer. YouTube is filled with Shroud videos more than anybody else, most of the players began to call him the best in PUBG, and some at all – the best person ever to play shooters.

Michael is one of the best, if not the best player in Fortnite, but he is not in a hurry to join any team, he just wants to show a beautiful game to his viewers. The punched 100 thousand paid subscribers level is far from a record for the Twitch site, but this is definitely one of the best achievements in shroud`s career, for which he can say thanks to Fortnite, because playing CS: GO or PUBG, he showed the game not at all worse, but he set his personal record here.

In our lists of settings that professionals use in their games, we have collected everything from mouse sensitivity to bandages. After all, the success of the game in Fortnite strongly depends on the good settings, which help to gain an advantage over the enemy. Shroud Fortnite Settings you can see below and find the best keyboard shortcuts for yourself, thereby increasing your skill.