There’s a lot of new game mechanics that appeared in the game with the start of Chapter 2 Season 5, such as the exotic weapons. Basically, they are just regular guns, but named differently and more rare. Most of the old mythical weapons are now exotic, but there’s a couple of new mythical items – it’s the Mandalorian’s jetpack and sniper rifle.

There are 5 exotic weapons in total – “The Dub” double-barrel shotgun, the “Boom” sniper rifle, the “Shadow Tracker” silenced pistol, the “Night Hawk” scoped revolver, and the “Storm Scout” sniper rifle. 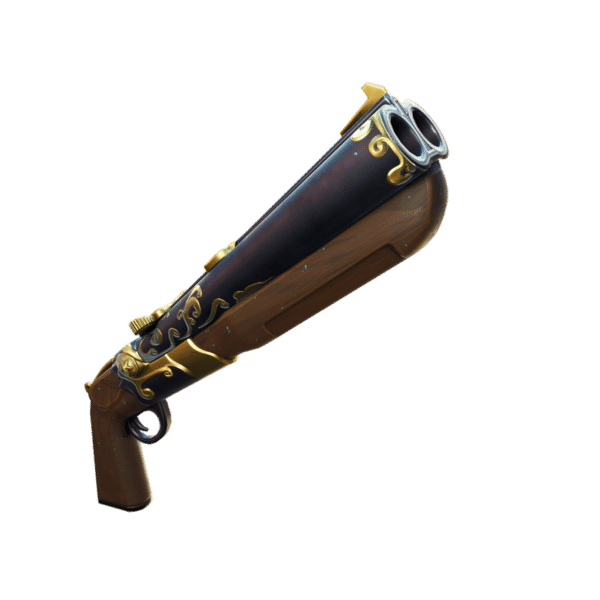 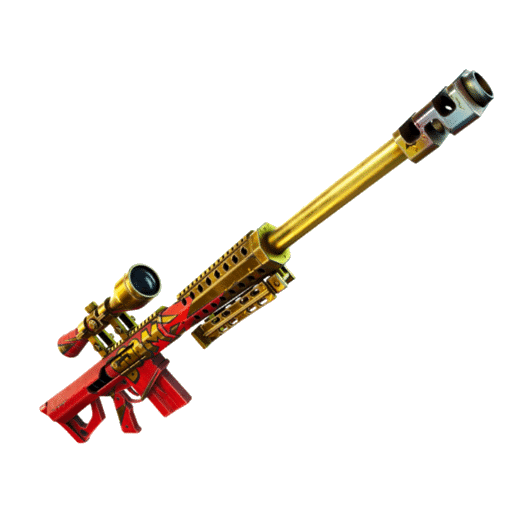 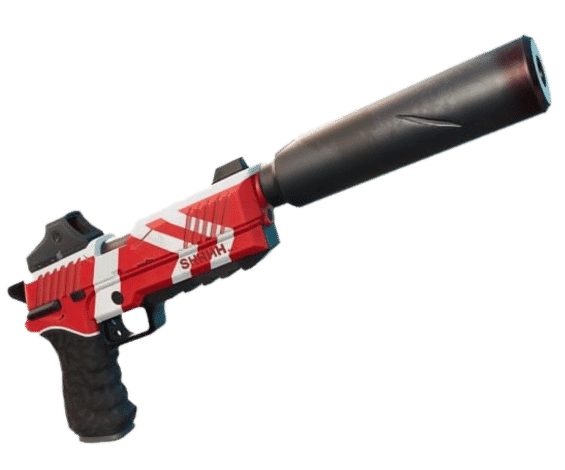 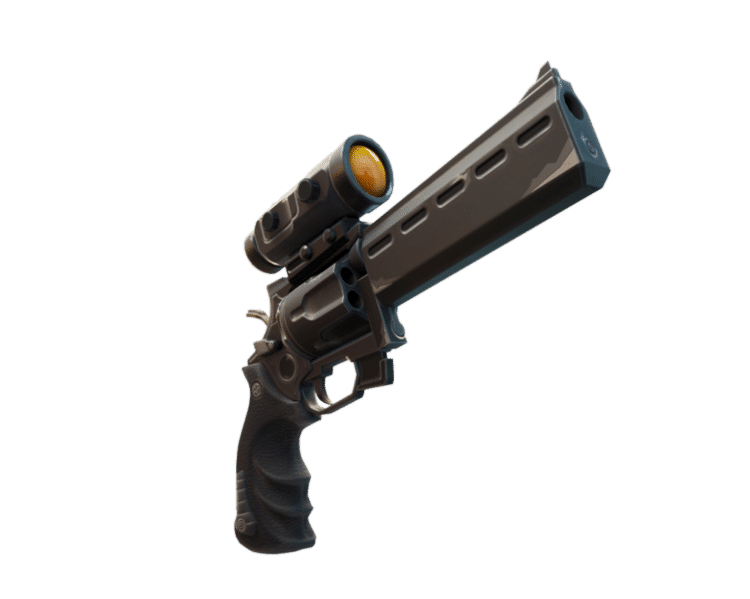 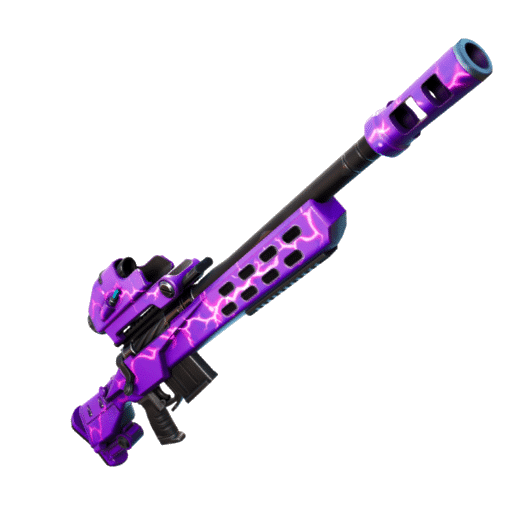 All of the weapons are sold by different NPCs, which are also new to the game. But you need not only to find the characters, but also to get some gold to buy a gun from them. 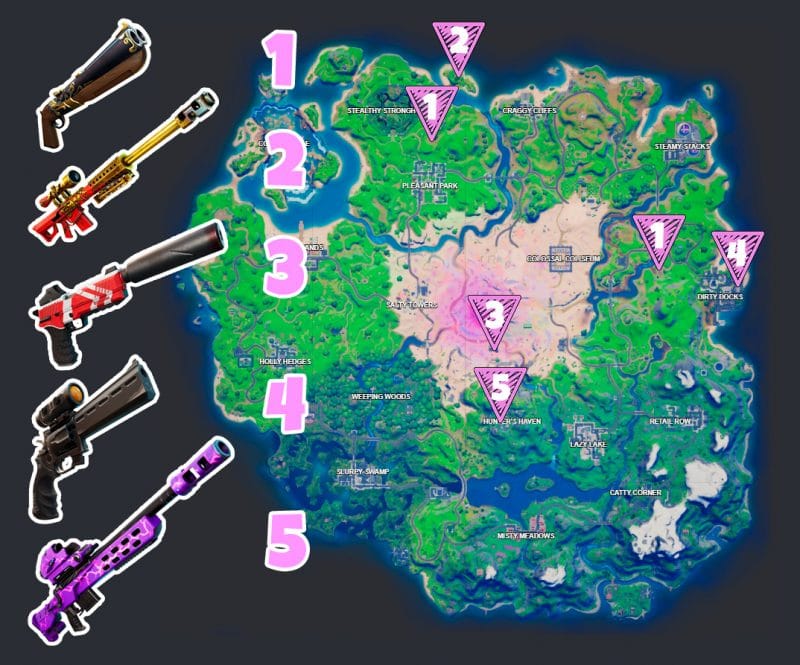 By the way, if you don’t know, how is gold used in Fortnite, this is the answer – you can buy different stuff from NPCs. The same NPCs can also give you bounties to get the gold, and you can also find it by opening safes or breaking random furniture.

All the exotic guns’ prices are 1225 gold bars, which is a lot, considering what you have to do to get the gold. So I recommend you reading this before you buy a gun and possibly waste your gold on something that you don’t like.

You can buy The Dub from Dummy the NPC, which can spawn in 1 of these 2 spots on the map. 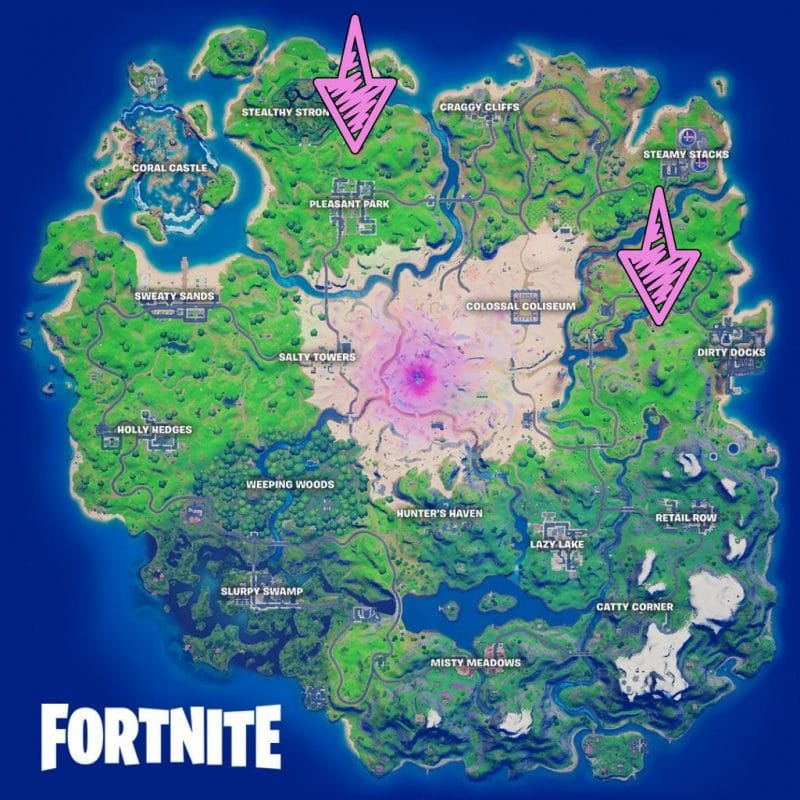 Having 1225 gold bars will be enough to buy this gun. Just interact with the NPC, hover your mouse pointer over the gun and press Buy.

It’s body damage is 120, but if you shoot someone in their head from close range, it will be a one-shot. However, this gun is not so good at breaking buildings – it only deals 90 damage to them. Reloading this gun takes a long time to finish, so be sure to find a safe position before you start reloading.

This gun’s another unique thing is that its recoil is so strong it will launch you the opposite directon each time you take a shot. This way you can launch yourself somewhere or even save yourself from taking fall damage or even dying from it.

“Boom” sniper rifle is sold by the Splode NPC. The location of this NPC is in the northern part of the map: 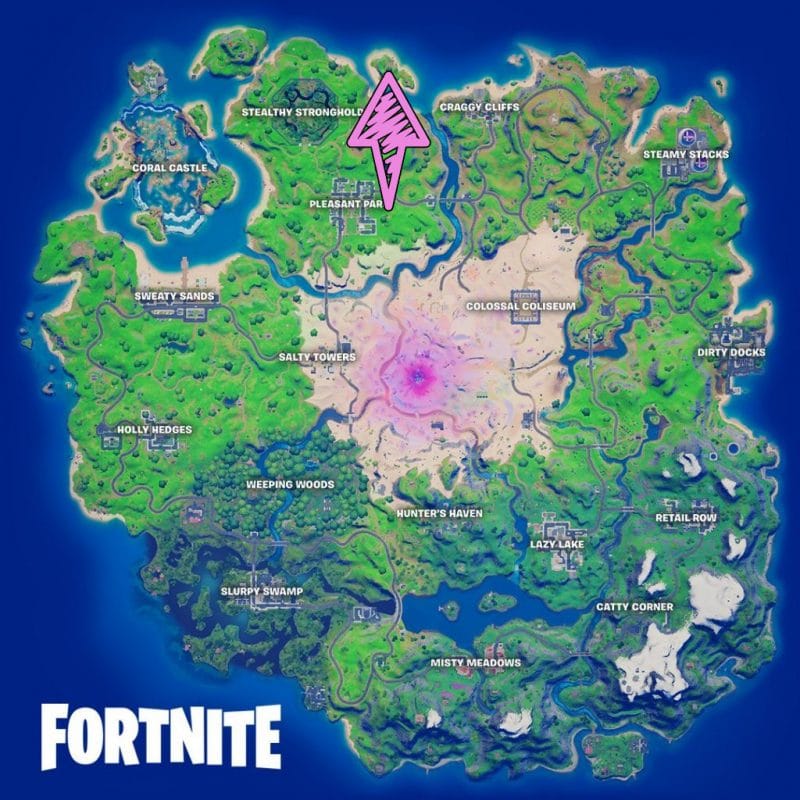 Boom is like the old Heavy Sniper Rifle, but with a unique feature. Its damage is around 70, but it has a 5-round mag instead of a 1-round one. The reload takes 4 seconds to complete, so aim better if you don’t want to wait.

The unique feature of this sniper rifle is that when you shoot an enemy, the bullet only deals 10 damage, but it also leaves a Clinger that will deal additional 60 damage in 2.5 seconds.

This sniper rifle also isn’t new to the game. You were able to find it before, but it came back to the game now, in Chapter 2 Season 5. However, its now an exotic weapon instead of a regular one.

You can buy it from Lexa. Here’s her location on the map: 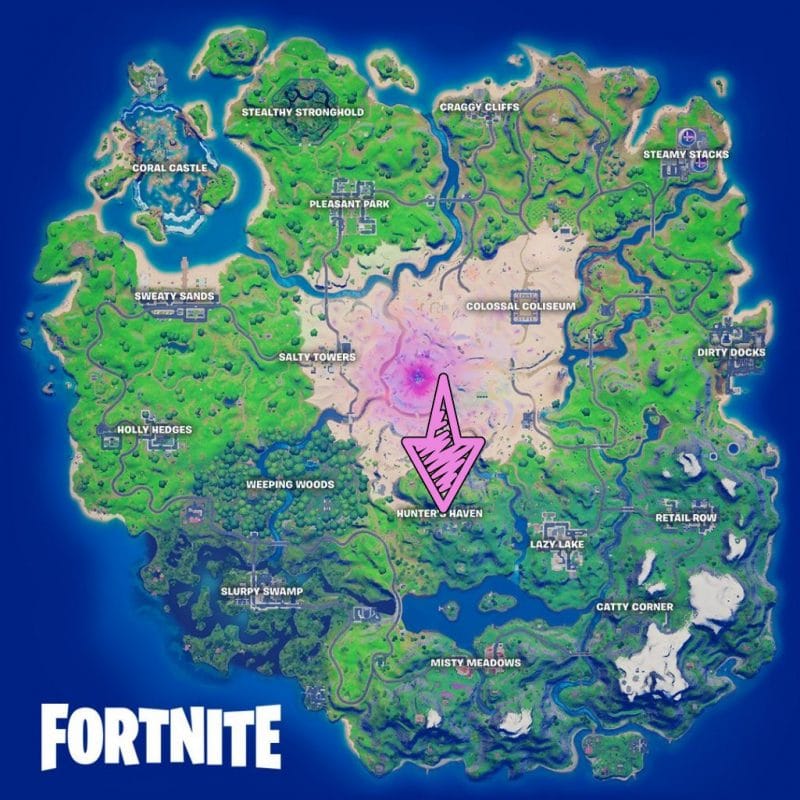 This sniper rifle’s damage is 85 (a headshot is a one-shot-one-kill), it has a 6-round mag and shoots pretty fast. but its unique feature is that it actually shows you the next safezone in its scope.

This pistol is a changed Silenced pistol, but also with a unique feature.

It is sold by Reese, which you can find at Dirty Docks. 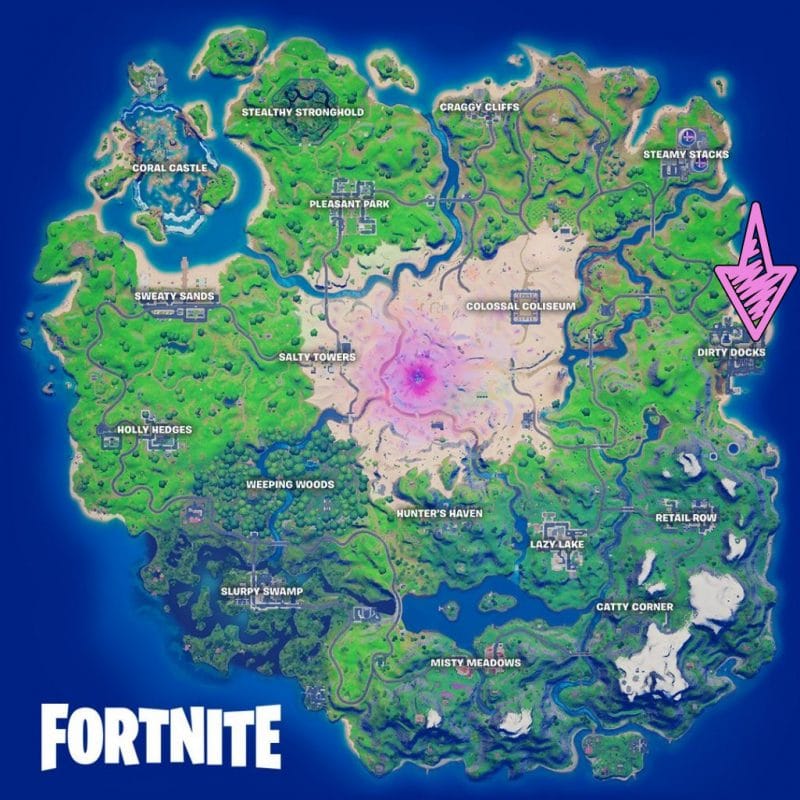 This pistol’s damage is 29 just like other pistols’ damage, it shoots fast and has a 16-round magazine. However, the damage drops significantly with the range increasing, so using a pistol for shooting enemies that are far away isn’t going to damage the enemy as much as it would at close ranges. Building damage is 29, which is also expectable.

The unique feature is that the pistol marks the enemy once you hit them, which will grant you the ability to see the enemy’s location even through walls, but only for a while. If you’ve used the flare gun from the past seasons, you know how it works.

Night Hawk is basically the scoped revolver, but with a thermal scope instead of a regular one. You can buy it from Mankace, which can be found in the middle of the map. 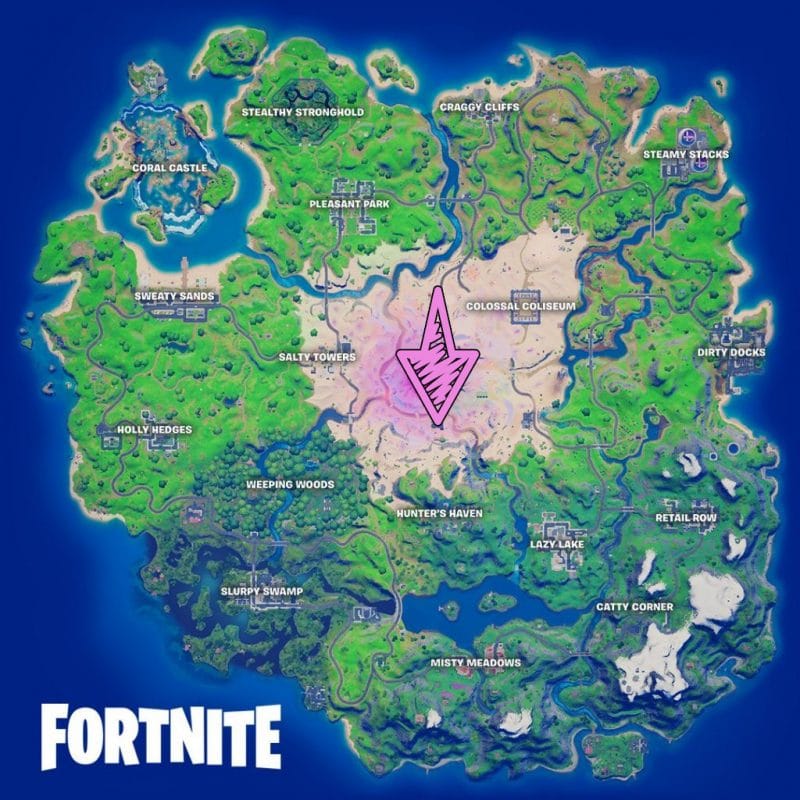 The damage of this revolver is 44 (88 for headshots and 44 to buildings), but it shoots slowly. But that’s not the point of this weapon – the thermal scope is. If you’ve ever eaten a thermal fish before, you will know what it’s like to look through this revolver’s scope. It shows everything in gray-scale, but the enemies glow really bright so you can notice them easily, and sometimes even through buildings.

There are only 2 mythical items in the game right now, so they will be in the end. The items are Mandalorian’s jetpack and sniper rifle. 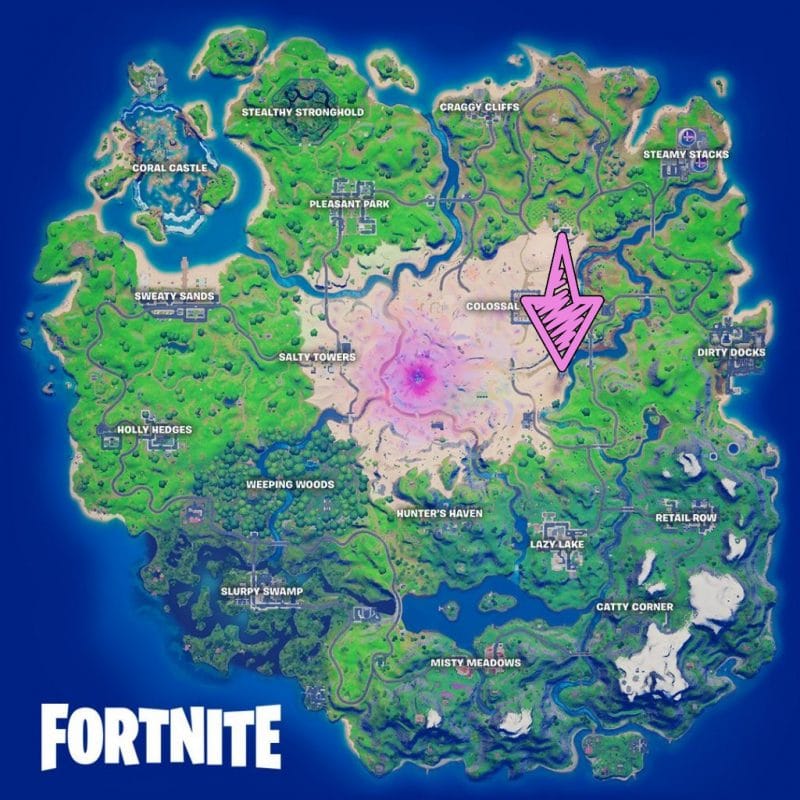 Unfortunately, Mandalorian isn’t an NPC, but he’s a Boss instead, so you will need to kill him to get his mythical items. Once he’s dead, he will drop his jetpack and sniper rifle.

Amban sniper rifle is another gun with a thermal scope. It will work just as the Night Hawk’s thermal scope, but its damage is much higher – 110 instead of 44. This is a sniper rifle, so players expect it to have more damage than a pistol does. The buildings damage is also 110.

Another feature of this rifle is its melee mode. To use the melee attack, press the attack button when not using the scope, and your character will dash forward and attack.

Mando’s Jetpack works just like the regular one, but the durability is unlimited. You can spend all the fuel, but the jetpack won’t break like the previous ones did. So, the worst thing that can happen to you while you use this jetpack, is the fuel running out and dropping you on the ground.

So, the game has 5 exotic guns and 1 mythical. All of them are unique to the first person who bought them, so don’t wait for too long if you want to buy an exotic gun – someone else might buy it faster.