Another survey with more Fortnite concepts

When nobody was expecting to get one, a new Fortnite survey with outfit concepts appeared in the subscribers’ mailboxes. Usually, these surveys come out once every half a year, but this time, only a couple of months have passed. There are no Christmas outfits in the list, so it’s hard to tell why the developers were in such hurry to post it. Anyway, it’s time to actually look at the concepts themselves. 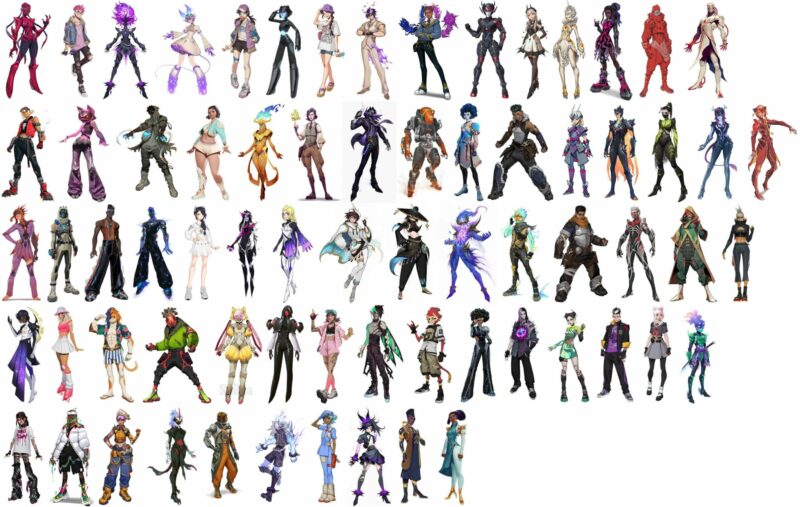 As usual, let’s look at the outfits in order, starting with the first row. The first one is a black and red female outfit in an armored suit with long ponytails. If you look at it from a distance, the armor can appear as gills. The next outfit is surprisingly simple compared to the ones on its sides – it’s a regular modern character wearing usual clothes. The next one, however, is hard to describe with words. Basically, it’s something gothic and medieval, but in the form of a female outfit. The next one is another female outfit with wide legs, glowing cat ears and a tail – a common sight in Fortnite.

Among the following outifts is another one with wide legs – this time, a black robot, also with ears. The next one looks like a summer version of Erisa, though, October is probably not the best time for such a skin. The next one is basically a white and purple version of the Blue Exorcist. Why not? Next, there are some more anime outfuits, as well as an egg-looking robot, Bratz, ketchup-man and a white and red cyborg.

The second line greets us with another pink female skin with wide legs and a helmet with cat ears. The ones on the sides can also be interesting – a punk girl with a burning arm, a mummy, summer Penny and a yellow… robot with horns? This character is pretty hard to describe, as well as some other ones that look like characters from other games. The ones on the right aren’t as unique – some kind of an explorer skin, a purple mix of Catalyst and Fade, and some evil or demonic female outfits on the right.

Line three has another version of Erisa, a bunch of other anime outfits, a couple of elemental characters. The right half has a some more of those energy elementals, as well as a wide armored guy skin and a Japanese outfit with a non-less wide hat.

Firstly, the next line has a summer Meowscles version, and secondly, we can finish here. But if you want to be serious, there are some other summer skins in the list, as well as some more colorful ones. The character on the left, for example, has quite a unique pair of wings and something like a space skirt, and on the right there are some more anime outfits. And there’s also a new version of Doctor Slone if you miss the character for some reason.

The last line only has a few more outfits – a melting liquid guy, some kind of a character mix from other games, a unique one-horned demon and a spiritual dog. And another anime outfit, of course. As a result, we have eight pairs of cat ears in total, and only four tails.

As you can see, the enormous amount of outfits in the game is going to get an addition quite soon. The skins that are going to get into the game depend on what concepts Fortnite players vote for. Perhaps, the results can be less expected that we’d think.