It’s been a while since the last Fortnite survey came out, so it’s not a surprise that a few days ago, a part of the game’s players received a survey asking to share their opinion. As always, this survey showed a ton of new concepts for everyone, and we’ll look at them further.

The first line has simple male and female outfits, as well as some that are so strange it’s hard to describe them. The first notable character is the blue-haired character with a cape and a strange aura. Right next to him, there’s a wolf outfit. The first wolf outfit came out a long while ago and was a part of a battle pass, so it would be interesting to get an alternative.

Now, let’s look at an interesting-looking female outfit dressed in white with gold accents. Her appearance doesn’t look like something you often see in Fortnite, and would probably match some kind of MMO game better. Right next to her, there’s also a neon translucent demonic-looking guy. Another unique skin, which looks a little unusual compared to the existing outfits.

In the end of the row, there’s something that looks like a mechanical creature with eyes all over its body. Another thing that you probably don’t see in the game every day. Third from the right is an outfit similar to a purple bunny wearing pink clothes. It’s probably not even a bunny, but it’s hard to identify such a creature. The second last one is another demonic character with sharp claws, red skin and a lot of black strands going from the top to the bottom. And the last one is… low-poly Jonesy?

The second row is opened by an electric glowing bear. The outfits to the right are less describable. On one hand, they are bright, colorful and interesting, but it’s hard to imagine how their final versions would look in the game. The most notable ones are probably the robotic parrot outfit with strange clothes and the lady on the right end of the list.

The third row has a brain in a jar for everyone to see that it exists. Some other characters that are worth noticing are a pink girl with translucent limbs. It’s a unique design with some nice details, like the clothes and small hand-like things. There’s also quite a lot of other colorful female outfits, but the one that is different is the golden guy in the middle. It might seem like it’s another Midas skin, but no, it’s a random character. If you look at the image close, you will also notice the new versions of Jules and Joey in her real form on the right. The row ends with a couple of anime girls at the right end.

The next line is a little more interesting. There’s an old guy for all the Relaxed Fit Jonesy fans. On the right, there’s a robotic bunny female outfit. A while ago, the players were waiting for Gemini to come out, and now we might get an alternative. Quite a lot of bunnies and demons for one survey, don’t you think? On her right, there’s a completely different character – a robot or a skeleton in with a flaming head in a cool trench coat. There are some more female outfits on the right, but let’s stop at a different outfit – a male outfit with a pink coat, white hair and horns. Another demonic outfit in the collection. On his right, there’s a Japanese vacuum robot with a bunch of masks around its head. Even if it got into the game, it probably wouldn’t become too popular due to its head size.

It’s hard to describe the pink creature on the right, and it’s just as hard to see what’s on the concept image. The other image on the right is easier – a girl on the right is wearing something like a slurp juice exoskeleton. The next one is a fox outfit, which stands out from the rest of them due to its colors and general style. There are also some outfits on the right part of the line, but they look less unique than the others.

The last line features another slurp juice character or a hologram – it’s hard to tell. Either way, the outfit wouldn’t probably look like this if it got added to the game. If we skip the girls on the right, your look might end up on someone’s nightmare. It’s either a paper monster or a strange rock, but either way, you wouldn’t like to see it at night.

When you recover from the terror you felt, you may look at a bunch of styles for existing outfits. An original outfit worth noticing is probably the paladin with white armor and a cape on the right. The armor fits the overall style of the outfit. And the reptile on the right is a modern version of Hybrid.

And finally, that’s it for the concepts, there were quite a lot of neon girls, bunnies and demons. Many outfits also have additional eyes or translucent limbs. 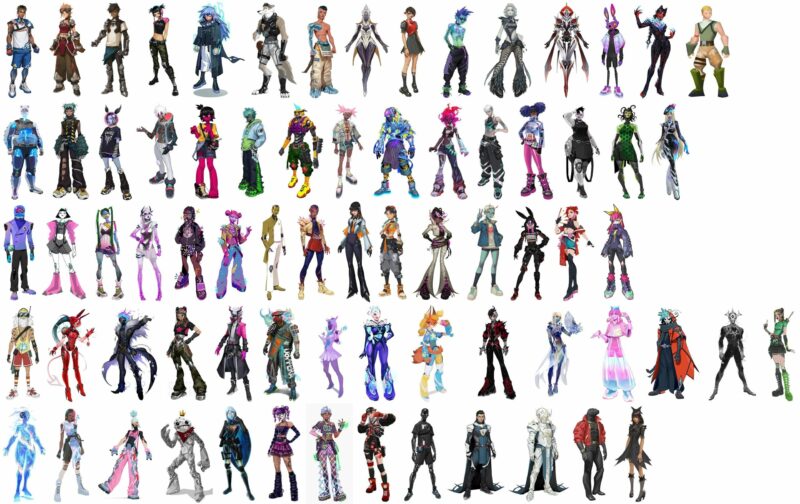 The existing outfits’ styles from the survey will probably end up in Fortnite anyway, and it’s hard to tell the future of the original concepts.