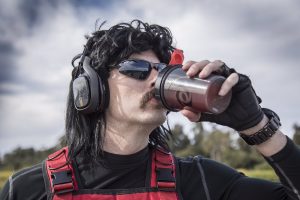 In the Dr DisRespect community they call him “a WWE character in the competitive gaming world”. Corporate identity: a wig, gaming headphones, black glasses and a rocker vest. A sort of hero of films from the 1980s, which looks like the coolest guy in the area. He constantly reads promo and uses the catchphrase. Wrestling connoisseurs would compare Beahm with Steve Austin or CM Punk. Dr DisRespect streams – many hours of performance. Only for this he does not need to jump from the ropes in an acrobatic jump. But it touches not only this.

In difficult times, Beahm’s wife advised him to do streaming. This happened at the moment when Dr DisRespect started moving the family to Washington State to start working on World of Tanks. At some point, he met with the founders of the service Boom.Tv. Those hired him as a consultant. As a result, the company financed the studio, its rent, and for that, Dr DisRespect shared the profit with them. It was then that the spouse offered to go all-in, and there come what may. So Dr DisRespect did the main work streaming. Now he drives a 1990 Lamborghini Diablo.

In 2017, “Guy” Beahm was often called the streamer of the year. First, he won the award from the Esports Industry Awards, then from the Video Game Awards. And it was for that. Despite the arrogant and cocky manner of communication and the high level of skill, Dr DisRespect not only entertained people, but also helped them. In July 2017, he was dissuading a guy from suicide live. Messages with gratitude to help in the fight against illness or depression streamer receives daily. Every time he helps people find the motivation to not give up and move forward. Although he behaves in broadcasting as a “bad boy”, in life he is a completely different person.

Beahm is now actively working with companies Razer, Turtle Beach, GFUEL, ASUS Republic of Gamers and Need For Seat. One of the most striking projects was a live broadcast from a boat. Beahm played PlayerUnknown’s Battlegrounds in the middle of the ocean. If the next time in the world of video games and streaming something crazy happens, rest assured it’s Dr DisRespect.

Dr DisRespect has returned to his Twitch channel and is again one of the most popular streamers! He plays Fortnite Battle Royale as a champion.

Many fortnite players only dream to play as well as Dr DisRespect. Dr DisRespect Fortnite Settings that pros use can be quite difficult to find, but here we have collected them all so that you can move your game to the next level.

Video with the best gaming moments of Dr. DisRespect: