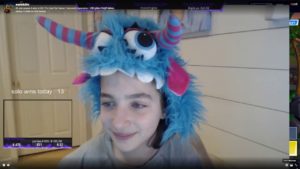 It is unlikely that you will find Fortnite fans who have not heard of Ninja or Tfue, but other charismatic streamers also play the battle royale from Epic Games. Among them, the author of the channel Faze EwOk is a 13-year-old deaf-and-dumb girl named Soleil from the USA who has become the favorite of the Fortnite community and the star of Twitch.tv over the past few days.

As can be understood from the name of the channel Faze EwOk – a fan of “Star Wars” and the Ewok race. She regularly streams Fortnite, and sends some of the donates to animal shelters. And also Salt is deaf from birth, therefore he plays with the function of visualization of sounds turned on. Despite the problem with her hearing, the girl performs at a fairly high level – she has more than 350 victories in Solo, she is in the top players of the American server, watching e-sports and dreams of getting into Team SoloMid. During one of the broadcasts, she earned five victories in just one and a half hours of stream, and in one of the matches she recorded 16 kills.

The girl was noticed by top casters like TimTheTatman (3.5 million followers), who called on their subscribers to support Ewokttv and her broadcasts. In just one night, more than 2 thousand subscribers increased at the Ewokttv channel, and the number of followers exceeded 26 thousand.