Epic Games will fix the bugs in the skins of Fortnite

Once again, reddit raised the topic of bugs in skins. The number of skins in Fortnite is incredibly large and it is becoming more and more difficult for developers to find problems, especially in old skins. But good, the community always comes to the rescue. One of the member of reddit even prepared a picture of all the skins that have bugs. The most amazing thing is that most of the skins are legendary, as well as the Double Helix skin from the special set for Nintendo Switch. 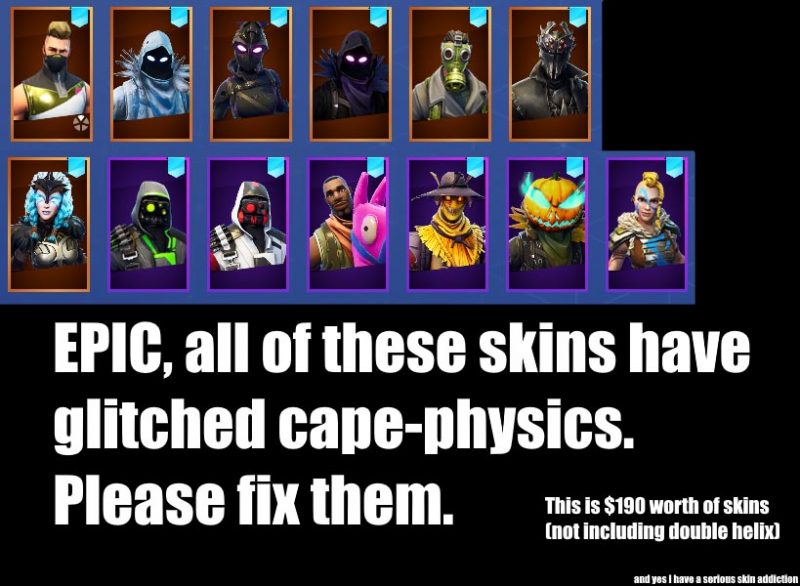 In the skins presented in the image, there are problems of animation as heroes, and backpacks, cloaks.

It is worth paying tribute and note that Epic Games are trying to quickly fix all the serious problems in the game associated with skins, as was the case with the Zoey skin, for example. However, this time they promised to actively address the ordinary problems of equipment.

Here is the answer from an Epic Games employee:

We’re aware that some Outfits have some extra starch in their cloth, causing certain clothing to be stiff rather than flexible. We’ll get these issues smoothed out as soon as we can.

In the meantime, if you’re experiencing a problem with an Outfit, please let us know a detailed description on what it is, which platform you play on, and which Outfit it’s affecting.

Thanks a bunch to the OP for bringing this issue up and for all the additional clarity/information in the comments.”