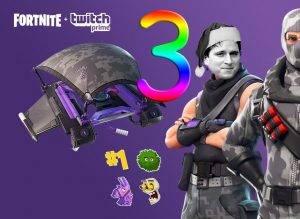 In Fortnite, as in any popular multiplayer game, skins are prized. They help users to show their uniqueness in the game world (in particular, expensive skins affect the level of boasting), therefore, the rarer the skin, the more valuable it is for players.

Twich Prime sets Fortnite from the very beginning caused a stir among the players because of their limitations. These packs were only available for a limited time period. Here are the first two sets that came out in February and May 2018:

For epic “Twitch Prime Pack” – this is primarily advertising. During the release of prime skins, Fortnite actively fought PUBG for leadership in the “Royal battles”. Now the leader is determined and Epic Games do not need such advertising.

When will Twitch Prime Pack 3 be released?

It is worth remembering that these are only our guesses. The new pack may not come out at all, but we tend to think positively and hope that Epic Games are waiting for an important event.

There have been leaks that the new “Twitch Prime Pack 3” kit will contain existing skins, but in different colors. We are sure that after such a patient period of time Epic will either not release a pack at all, or release something legendary. But this is all just guesses, and we all have to wait for an official statement. But in order not to look for free skins, we recommend that you read the guide on how to get V-Bucks for free.