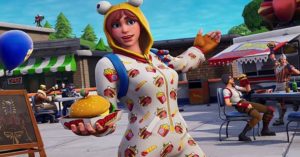 And here we have the new Fortnite challenges of week 6! The tests were not long in coming – we again see in them tasks like “deal damage” and “search”.