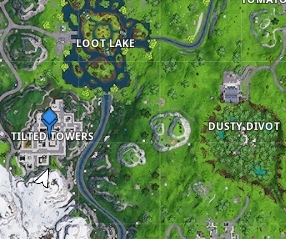 Tilted Towers is a popular area on the Royal Battle map, located in the coordinates D5-D6, between the Loot Lake and the Shifty Shafts. It is the largest city with many high-rise buildings, vehicles and is the largest settlement on the map.

Tilted Towers were first presented in an update on January 18, 2018. In the 4th season, a meteor fell into this area and created a huge crater in the center of the city, completely destroying the three-story building. After the crater was cleaned, the construction of a new building began. At 9 Week 5 Season, the building was completed and turned into a sporting goods store, and at 10 Week 5 Season, the store was destroyed by Cube. 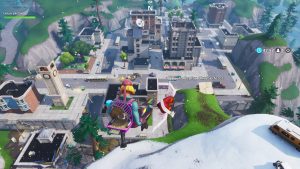