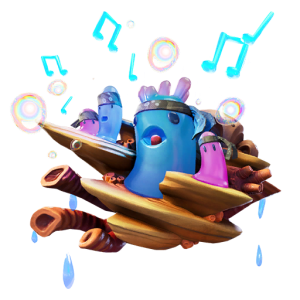 There’s a common occurrence in the movies, when the creators make an additional smaller storyline. The simplest example is Scrat from the Ice Age movies.  And it seems like Fortnite developers have decided to do something similar – we already had an additional storyline in Chapter 2 Season 2, when bears and gnomes fought against each other, but then concluded peace and now they have fun together. Season 3 Chapter 2 has something similar prepared – Fortnite Coral Buddy Week 1 Challenge has already started. These wave singers now have their own challenges.

To get 25 000 XP, you need to land on the northernmost island on the map and give 100 wood to Coral Buddies. That way you’ll help the new coral civilization thrive and get 25000 XP as well as the “From the primordial ooze” achievement. The easiest way to complete the challenge is playing Team Rumble, because you won’t even need to chop wood – you already have enough when you respawn.

As for Coral Buddies Challenges themselves, I think that there’s going to be a whole series of challenges, and each week we’ll know something new.

Maybe, we’ll even see some major steps of human civilization’s evolution, but anyway, it’s good to see that Epic Games care about the island’s world and lore. If you want to know about what’s coming next, keep track on the site, we’ll add new Coral Buddies challenges as soon as possible when they come out.