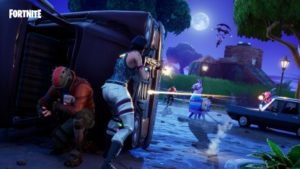 The mode is a race for murder, while the player has an unlimited number of respawn. There are only two teams in the mode – both for 20 people. Each of them had to kill 150 kills to win (100 needed before v8.00 update).

This LTM is a dynamic, action-packed game in which players are encouraged to show aggression and work together to eliminate as many gamers from the opposite side as possible.

Here, players must unite and collect 100 kills to win the match. This race will certainly determine who is the best!