The event “Unvaulting”, which occurred in Fortnite on May 4, 2019, will forever remain in history, because it not only gave a lot of wonderful emotions, but also destroyed 2 locations: an Retail Row and Tilted towers. The first location was in the game from the very start of the battle royal, so we honor its memory.

The “Unvaulting” event started at 10:00 pm and took place on a vile pond. At the designated time, a bright light burst out of the hatch in the center of the location and rushed into the sky, all the rune compartments were activated and the entire platform gradually descended to form a hole into which players had to jump.

By the way, the first problems of the event were connected with this, many players did not guess to jump and waited from above hoping to continue.

Having sunk into the space under the pond, the player got into the room, which we probably saw during the “butterfly” event, but it was modified. In the center was a glass ball that spewed black flames, and next to it were 6 blocks into which objects previously removed from the game were chained.

Among the items were:

Players could optionally break one of the blocks and the item that the majority chose will be returned to the game. If you are not playing Fortnite for the first few days, then you know how many users leave a comment about returning to the Drum Gun game, so everyone beat on him (both in our video and in general).

Curious fact. Every time when the item is removed from the game, we see the line “moved to the storage”, and now we know exactly how the place looks like according to the developers.

After the block crashed, everyone threw up and the second part of the event began – the eruption of the volcano. The sky was shrouded in ashen red and everyone understood what was about to happen. Three shells fired in succession from the volcano: 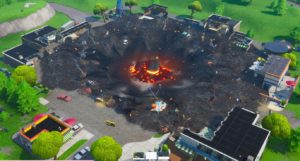 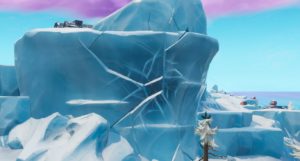 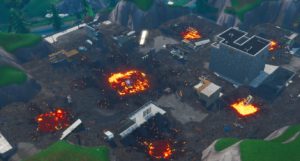 If you enter the game now, then in the place of your favorite locations you will see only ashes and fragments.

Such was the event “Unvaulting”, which is one of the final the 8th season Fortnite. As a result, we received the return of the topson, the destruction of 2 locations and a complete lack of understanding regarding the events that will occur in season 9. Unfortunately, in spite of all the work done by the epic, the bugs could not be avoided. In addition to those who did not guess to jump into the hatch, there were also those who simply did not open the hatch – they are preparing a solution for these users that will help to participate in the event once again. Well, the cherry on the cake was a gift from Epic Games in the form of a hang-glider Illusory wings, which will be received by all participants of the event.