Fortnitemares 2021: all the skins, new guns and short films

October is already here, which means that it’s time to unpack your paper bats and rubber spiders, because Halloween is coming up next. This year, we’ll have new thematic skins, items and short movies. The developers are preparing for such a major event from the end of the previous one, and this event is called Fortnitemares 2021.

All Halloween skins in 2021

The first things we’re going to talk about are skins. They won’t just appear in the item shop – instead, they have a special queue that consists of playing cards with some mysterious symbols. We’ll be shown 4 new cards each week, and each of them will have a clue for the upcoming outfit on its shirt. 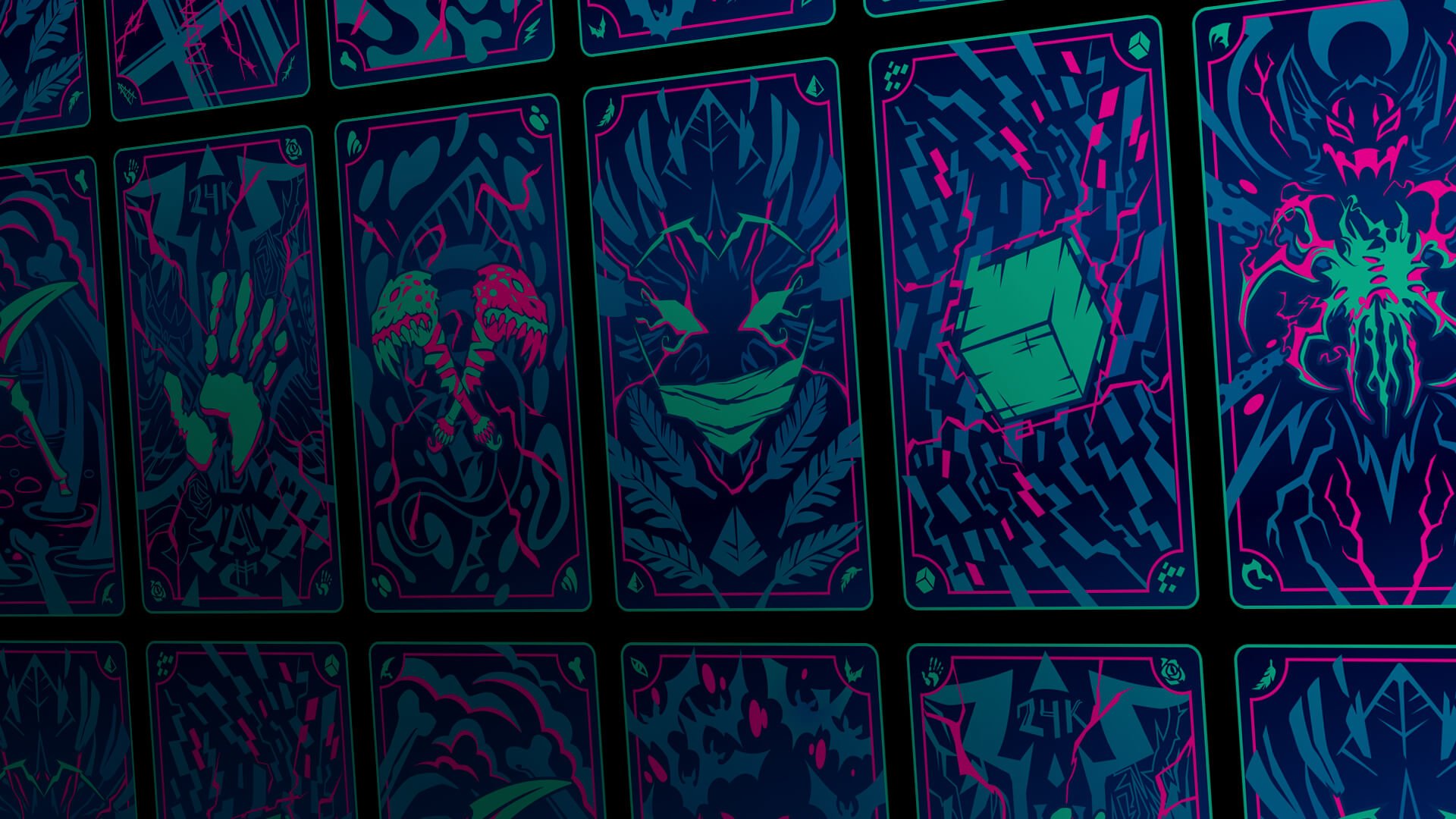 The first skin is Frankenstein’s Monster, which is made in the style of Universal’s movies. It’s so classic that there’s nothing more we can add. It’s already available in the item shop. 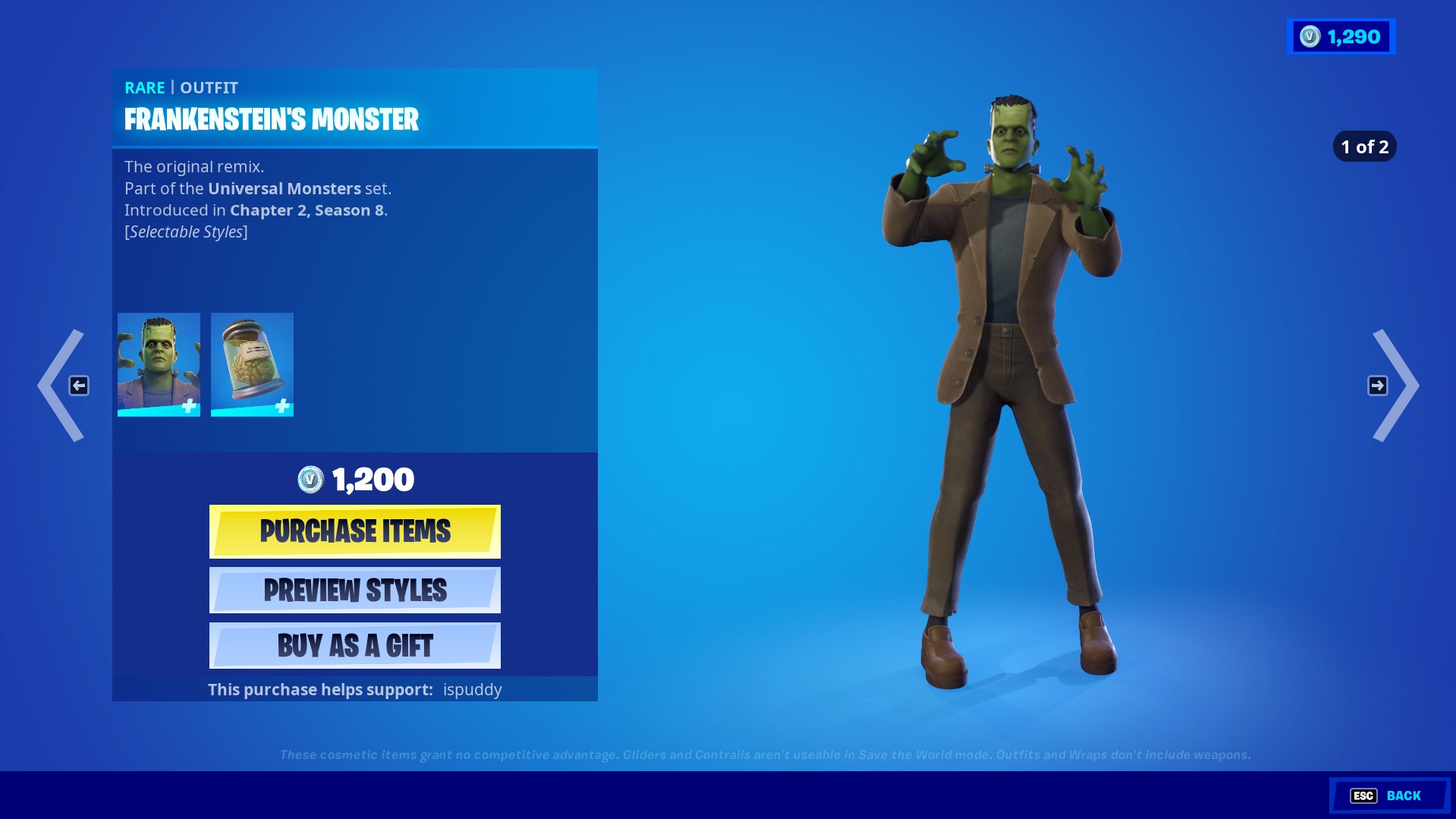 The price of the skin is 1200 V-Bucks. You can also purchase a shovel pickaxe and a wrap separately. 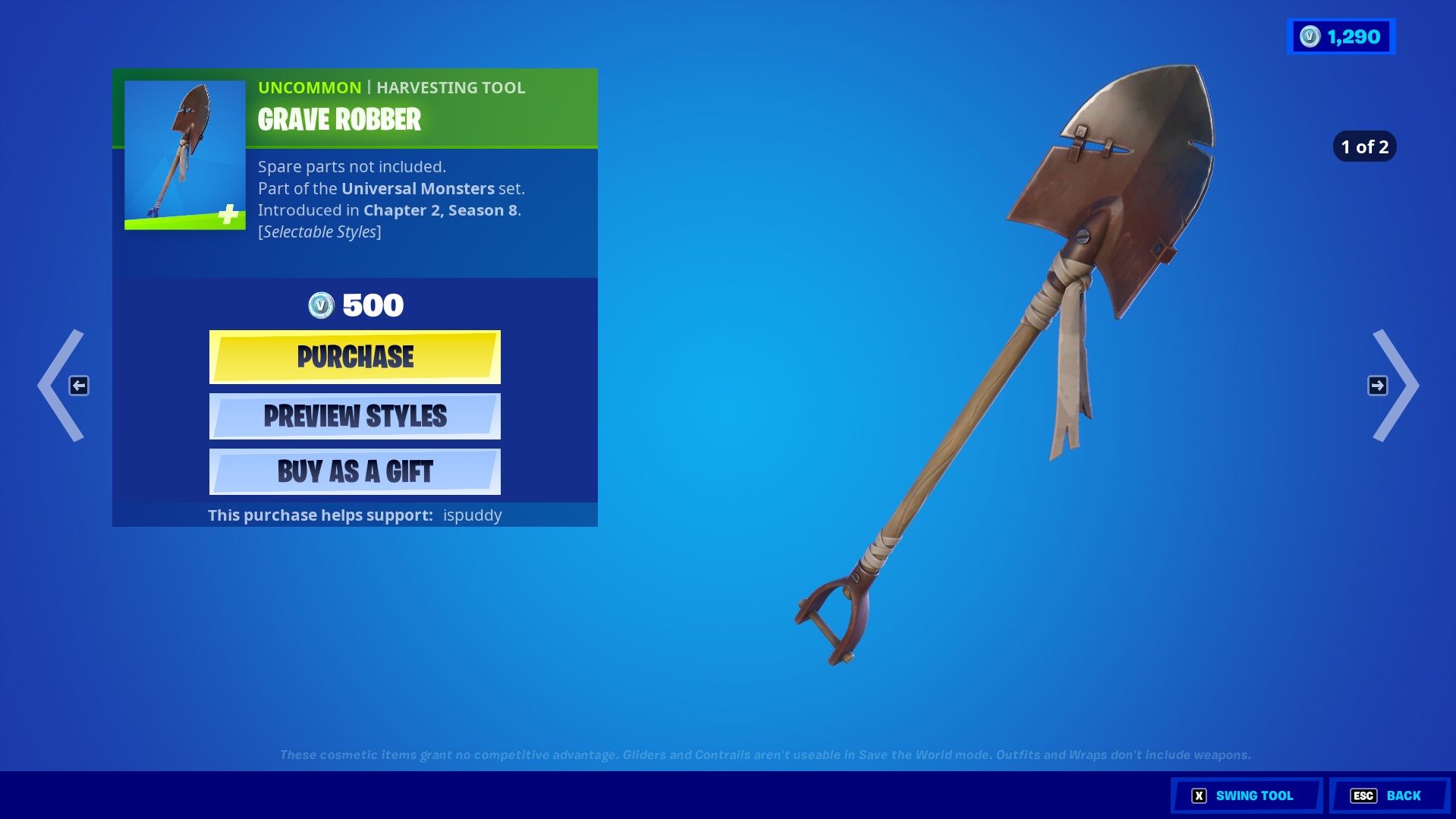 The next skin is also a monster, but a Fortnite-themed one – Curdle Team Leader, whose look was already seen by a lot of people due to dataminers’ leaks. 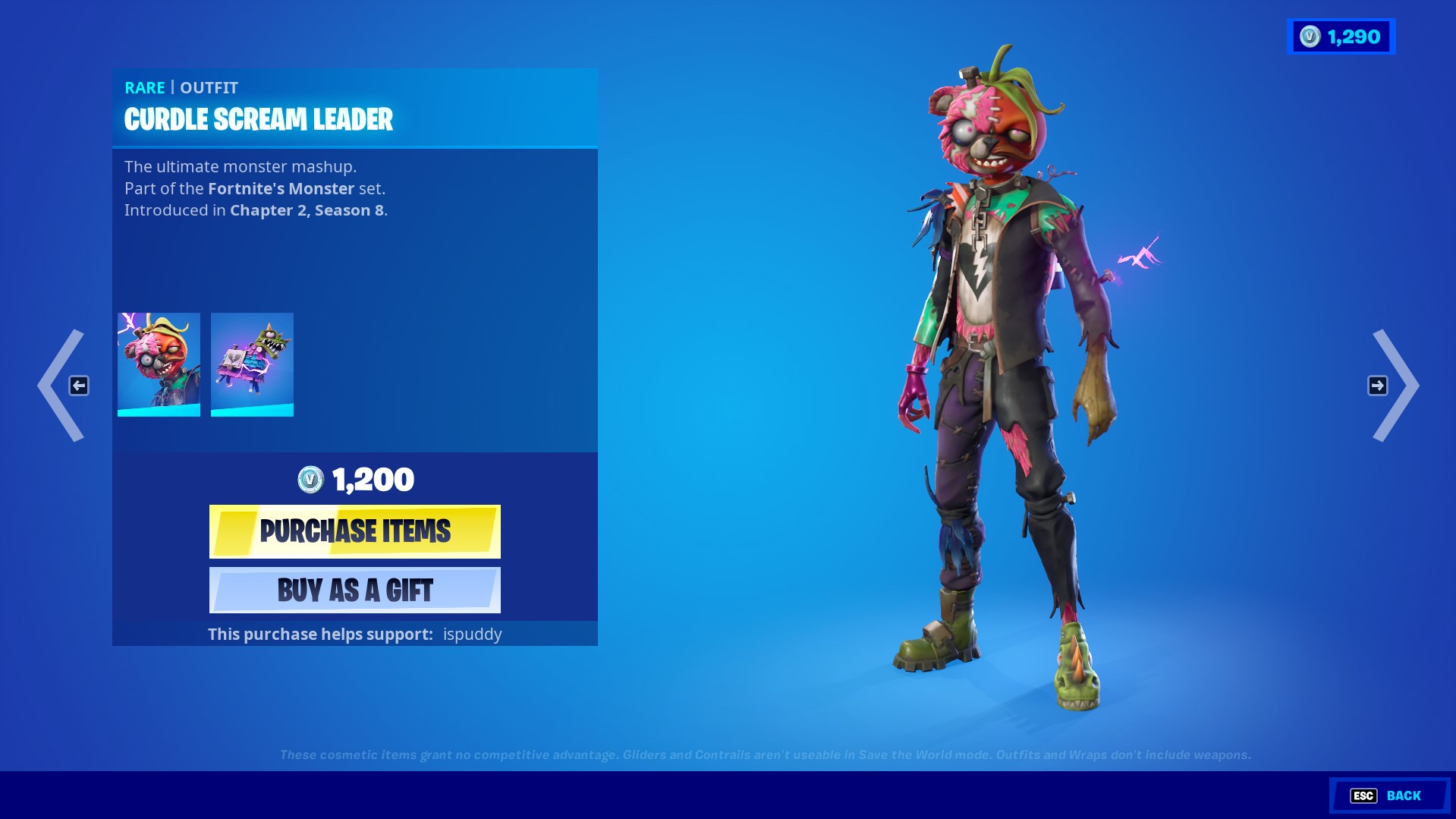 This skin is also already available in the item shop, and it’s pretty scary – a rotten tomato with a scary panda surely make a terrifying combo.

The price of this skin is also 1200 V-Bucks, and you can also purchase a pickaxe for 800 V-Bucks separately.

Right after yet another team leader skin, there’s another raider skin – Skeletara. We’ve seen this skin at the Late Game screen, as well as in the leaks for the 18.10 update. 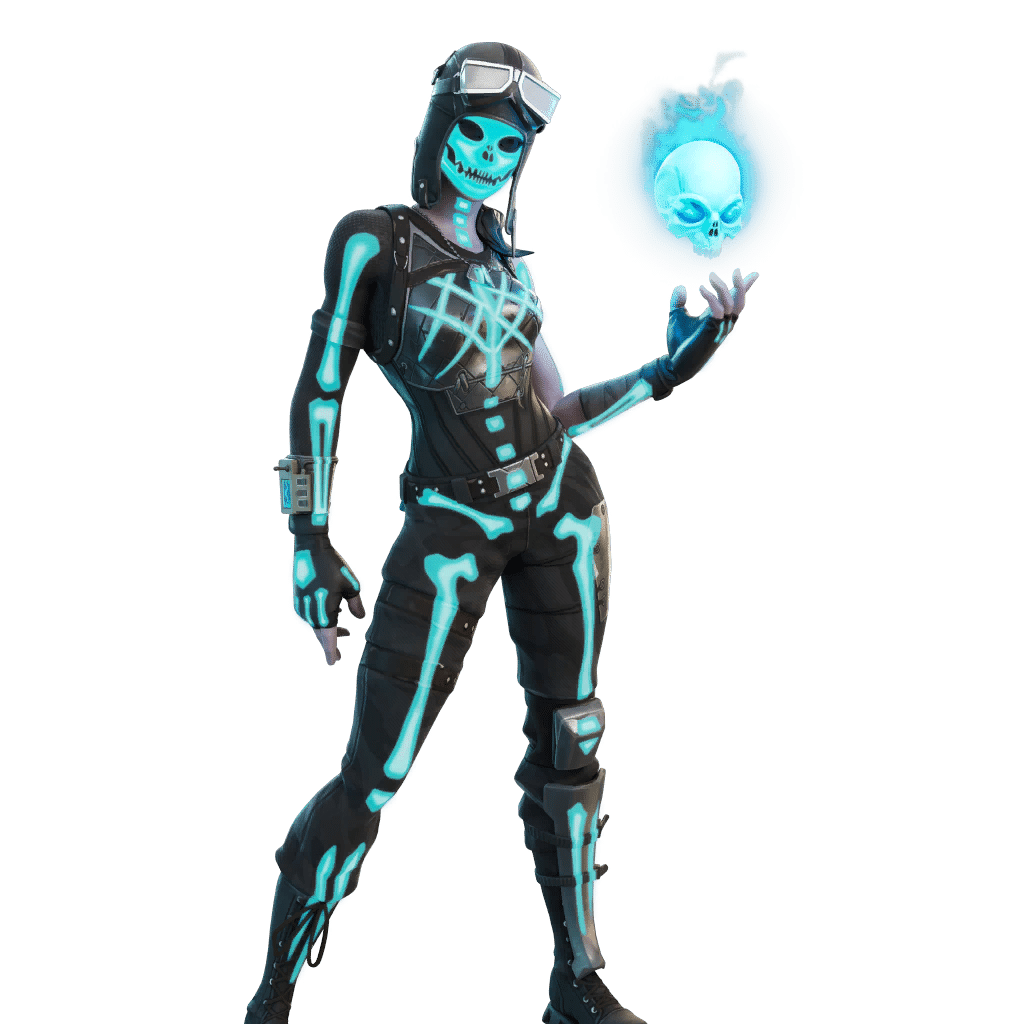 This outfit should become available during the first week of Fortnitemares 2021.

Thanks to some community members’ brains, we know that the hat belongs to Rick Grimes from The Walking Dead. You can read more about it HERE.

The card with this skin will appear during week 2 of this event, but we already know that Golden Skull Trooper is behind it thanks to the official picture. However, we don’t know if it will be a separate skin or a style yet. 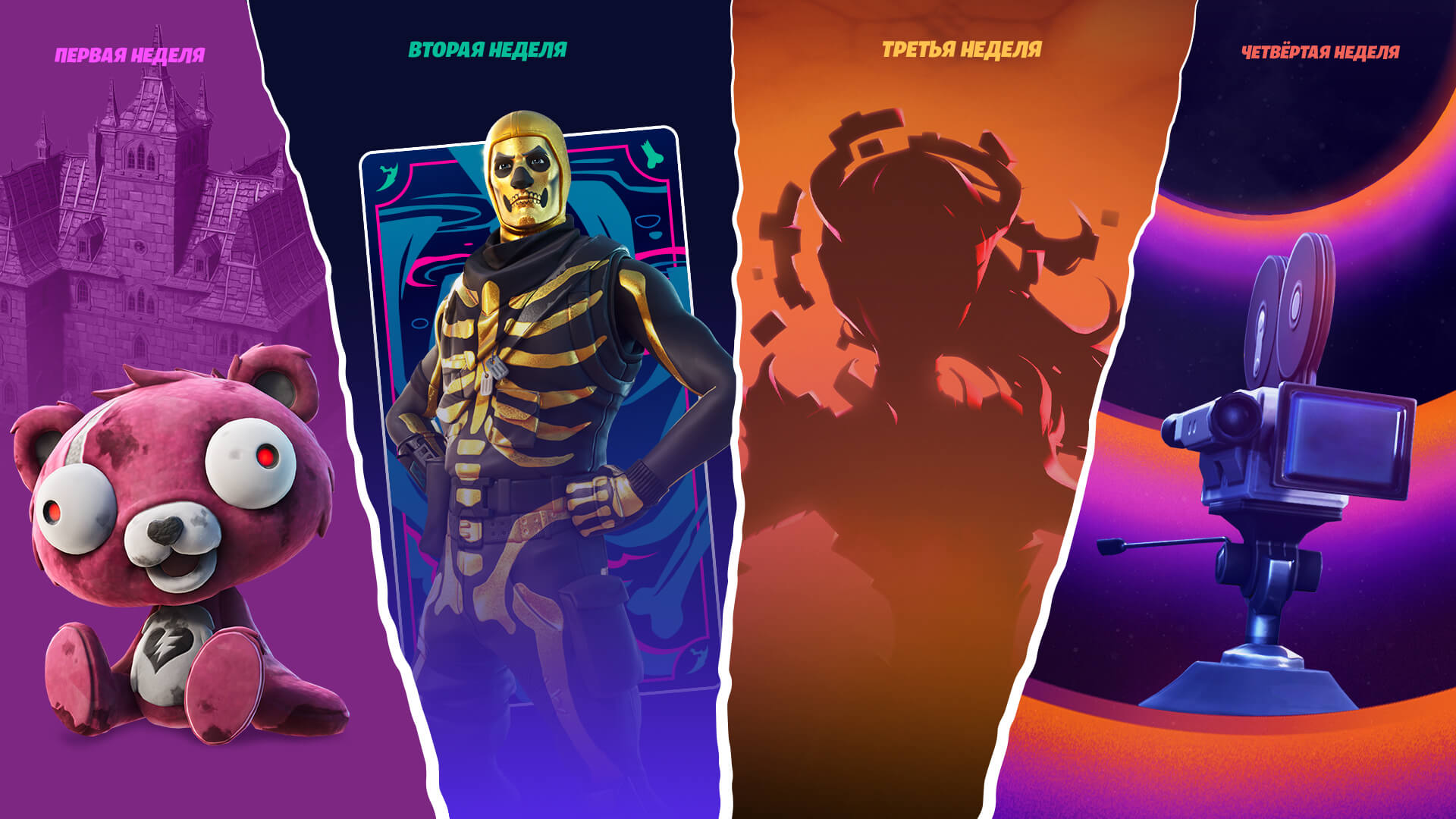 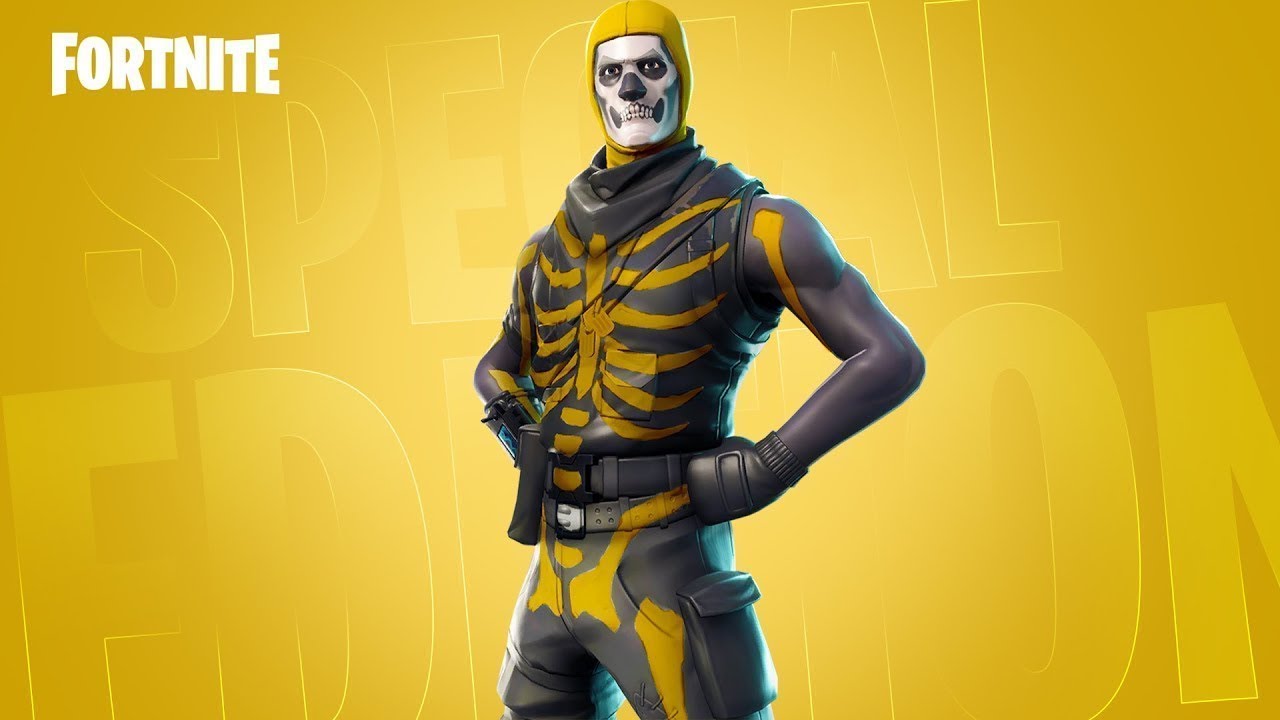 The rest of the skins

Data miners also have some guesses about the upcoming weeks. They say that the Mummy, Shadow Midas and a new version of Big Mouth will become available. We don’t know if the Mummy and Big Mouth skins will look like the ones in the picture, but we do know that the Mummy skin will be inspired by Universal’s movies, just like Frankenstein’s Monster. 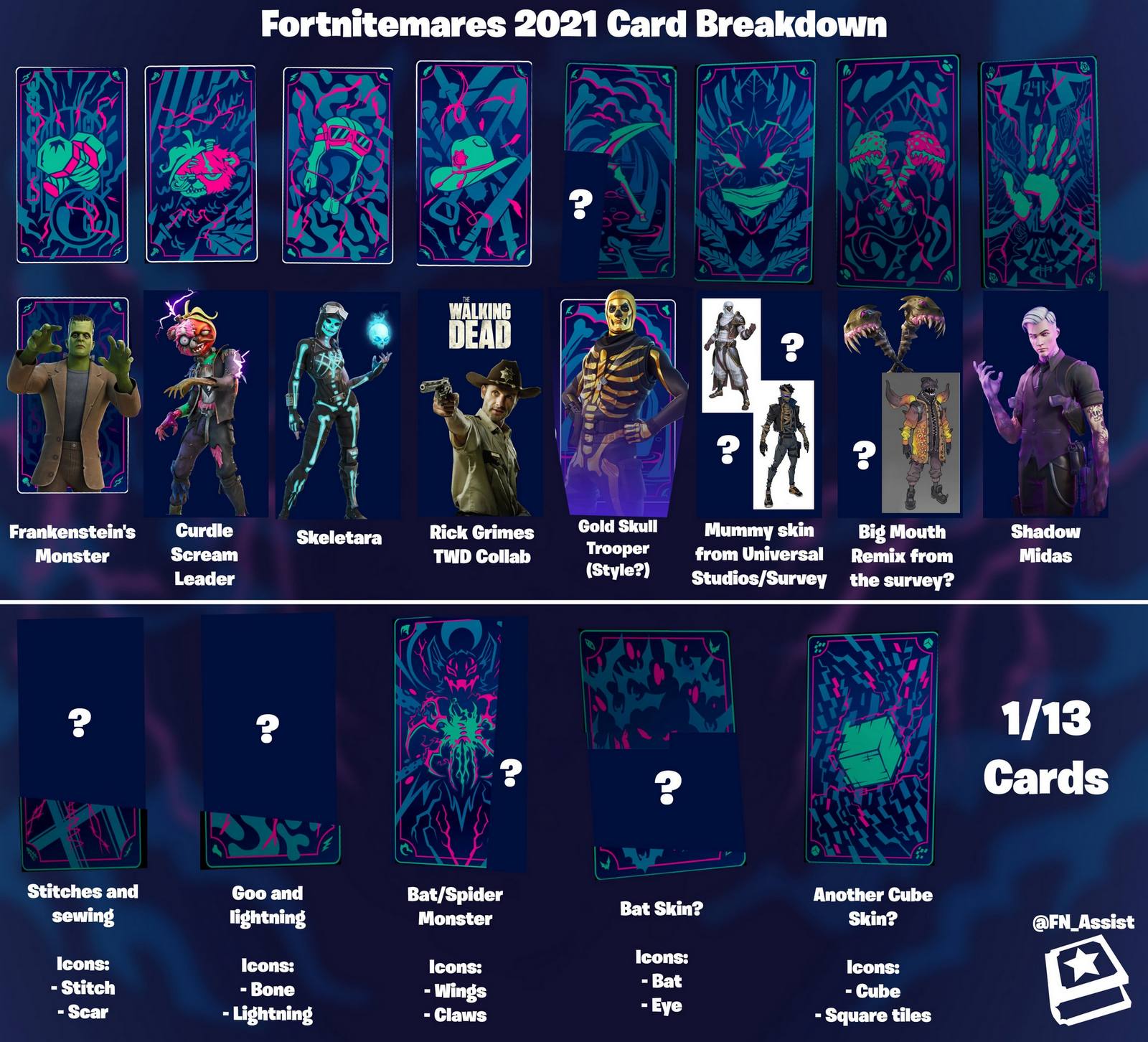 And if you’re reading this news from the USA, you have a chance to see a real Battle Bus at the Universal CityWalk boulevard, which is right next to the Universal Studios amusement park in Hollywood. There will be cosplayers dressed as the most popular Fortnite characters the whole month. 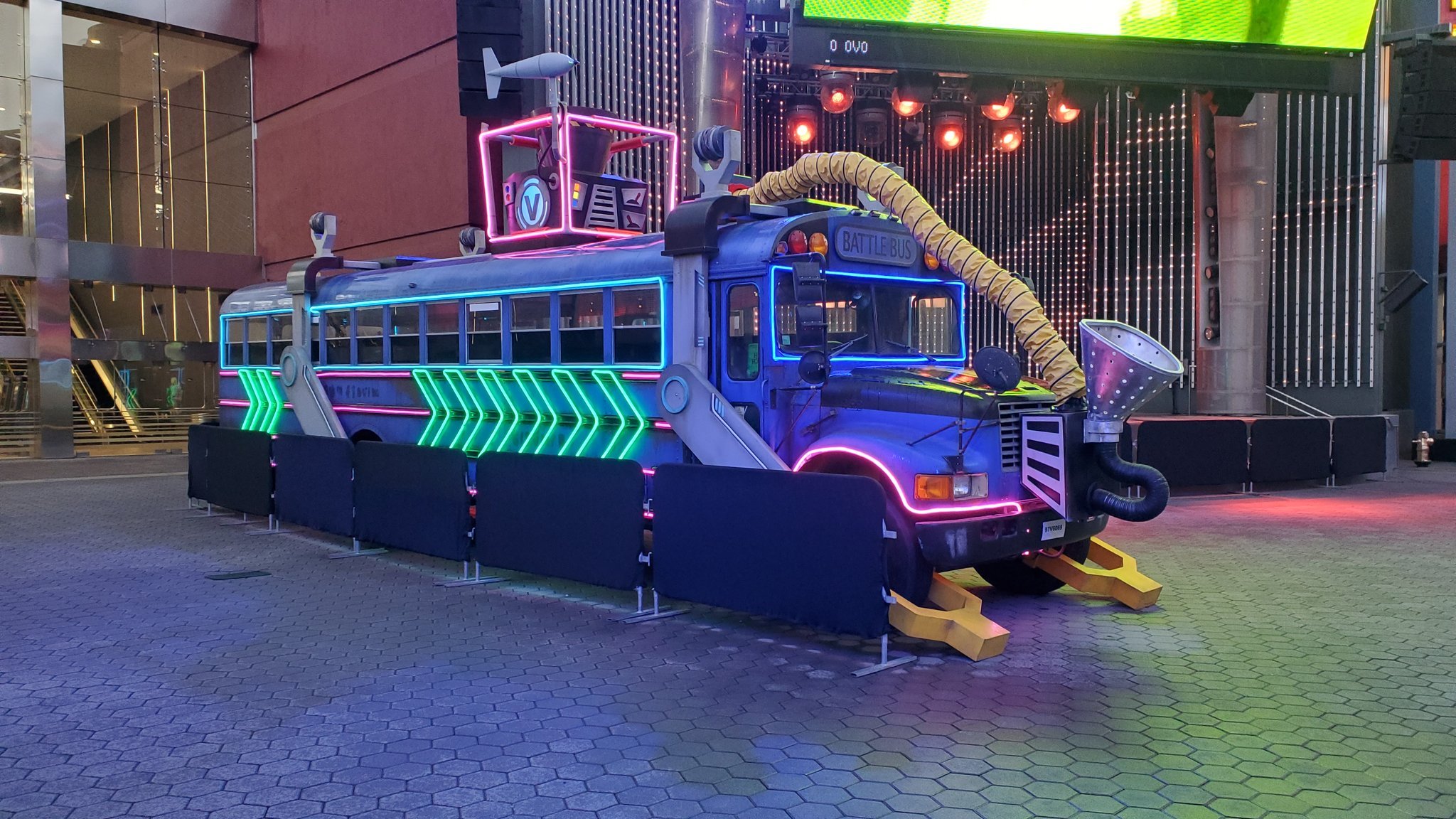 While the cube gang keeps exploring the island, a new gun appeared – the Dual Fiend Hunters. They’re small, but quite deadly against the monsters from the Sideways. They can be found everywhere around the island: in chests and on the ground.

The Dual Fiend Hunters will most likely release next Tuesday as a content update, as of now they’re set to spawn in floor loot, supply drops & sideways chests (could change)

Body & Headshot Damage is multiplied by x2 when shooting at the sideways monsters/fiends! pic.twitter.com/28s55l9SVe

At the end of October, we’ll have another session of Fortnite shorts. The most interesting thing here is that every short will be shown in its own unique hall in the special creator-made movie theater.

The developers promised to release even more content related to Fortnitemares 2021 during October, so there may even be challenges and rewards. For now, however, we can wait and enjoy the content that is already available.