What is the file size of the Fortnite Battle Royale on PC/PS4/Xbox One/Mobile?

In the courtyard in 2019, and each new game already weighs not 700 megabytes, but requires dozens or even hundreds of gigabytes. Fortnite is no exception to the rule. In this article, we will tell you how much Fortnite weighs on PCs, mobile phones and consoles. Also do not forget to familiarize yourself with the system requirements of Fortnite. 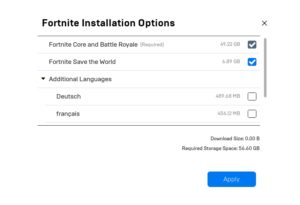 To find out how much space you need on your computer, you need to understand what you want to play. Fortnite consists of 2 modes:

An explanation is needed here, the PvE mode itself weighs 7 GB, but the PvE cannot be installed without the main files. That is why it is necessary to summarize the “Save the world” and the main files and we get 57 GB.

Creative mode is not a separate mode and is part of the “Battle Royale”, so if you want to play only in creative mode, you just have 40GB on your hard drive.

Consoles cannot boast ease of memory expansion, so for the PS4 and Xbox versions everything is much more democratic. We suspect that all the information is stored in the PC version, and in the console versions only the most necessary, but we do not exclude that the whole thing is in architecture. Anyway the sizes are as follows:

Mobile phones, although they have a resolution comparable to that of a computer, but the specification of the PC level is not yet required. It is from here and a significant change in size, compared with stationary devices.

The version for iOS and Android are similar in structure and weigh about the same.

And if you have not downloaded the Fortnite on android, then be sure to try. There is no PVE on the mobile, but the royale battle will look completely new.