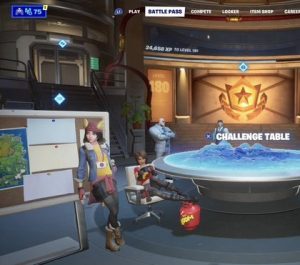 Some days ago the cables that were seen in the Midas’ room were added to the Battle Pass lobby. The cables power the doomsday device and it’s obvious that the device is going to a new level because now there are even more wires. On the other hand, the device could be a generator that powers everything around it, and the cables give additional power for the tanks around the Agency. Anyway, the next stage of this event has already started.

As for dataminers, they went further decided to examine the wires’ way inside the Agency. After detaching the camera, they followed the farthest areas available for viewing and showed how everything works.

There are three other stages for the cables.@ximton activated them early and this is how it will look like in the future. pic.twitter.com/4PdYj6VNTY

As for visible map changes, there are none around the Agency. Most likely, we’ll get some new information and the tanks will start working, and maybe even the doomsday device itself (which has not received an official name yet) will give some obvious signs of working. All the characters are unlocked, and limitless concerts are definitely not the thing that interests players and fans of the game’s lore. If you’re not a Fortnite player yet, you can download the game and join our community.