Everything we know about Fortnite Chapter 3

For active Fortnite players, seasons fly by at huge speed. It feels like it’s been just a year since we were visiting Lazy Links, even though it has actually been 3 years. The situation is the same with Chapter 2 – according to calculations, its length is almost the same as the length of Chapter 1. It seems like that it’s time for a new Fortnite chapter – Chapter 3, and data miners and content makers are already talking about it everywhere. Besides that, we have an official confirmation for Chapter 3. 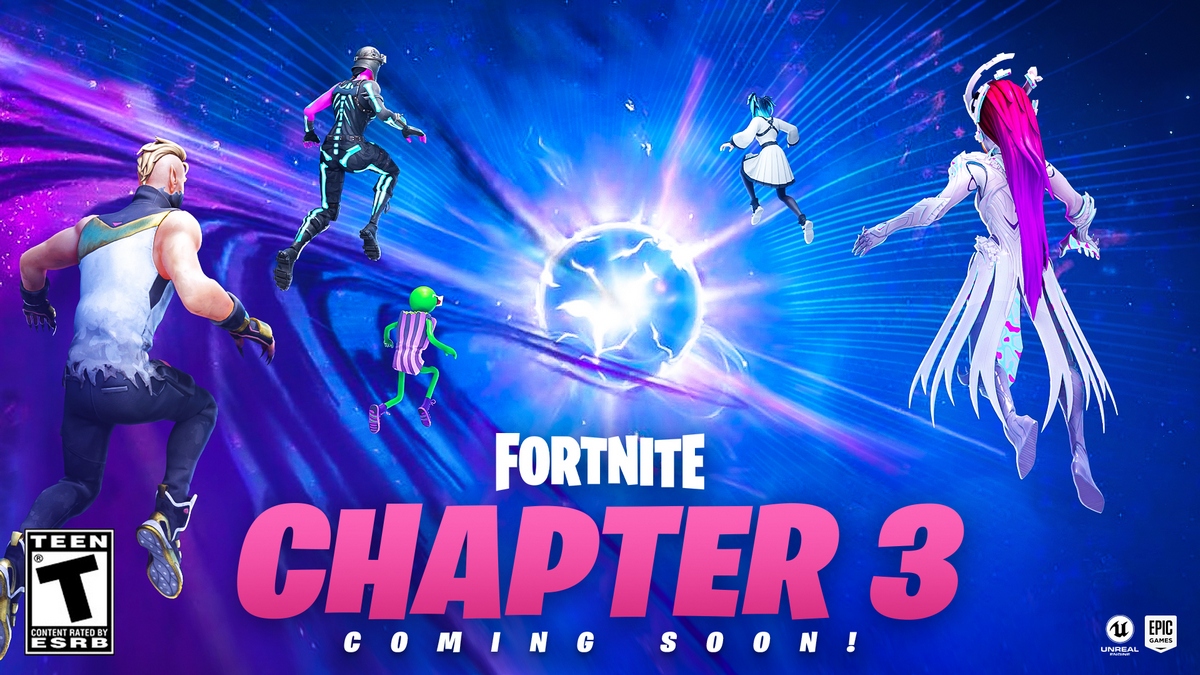 Let’s start from the edge of Chapters 1 and 2 – the end of Season X (or Season 10). The final event was very different from all the previous ones – instead of slightly changing the map, it resulted in a black hole taking over the whole game for a few days. 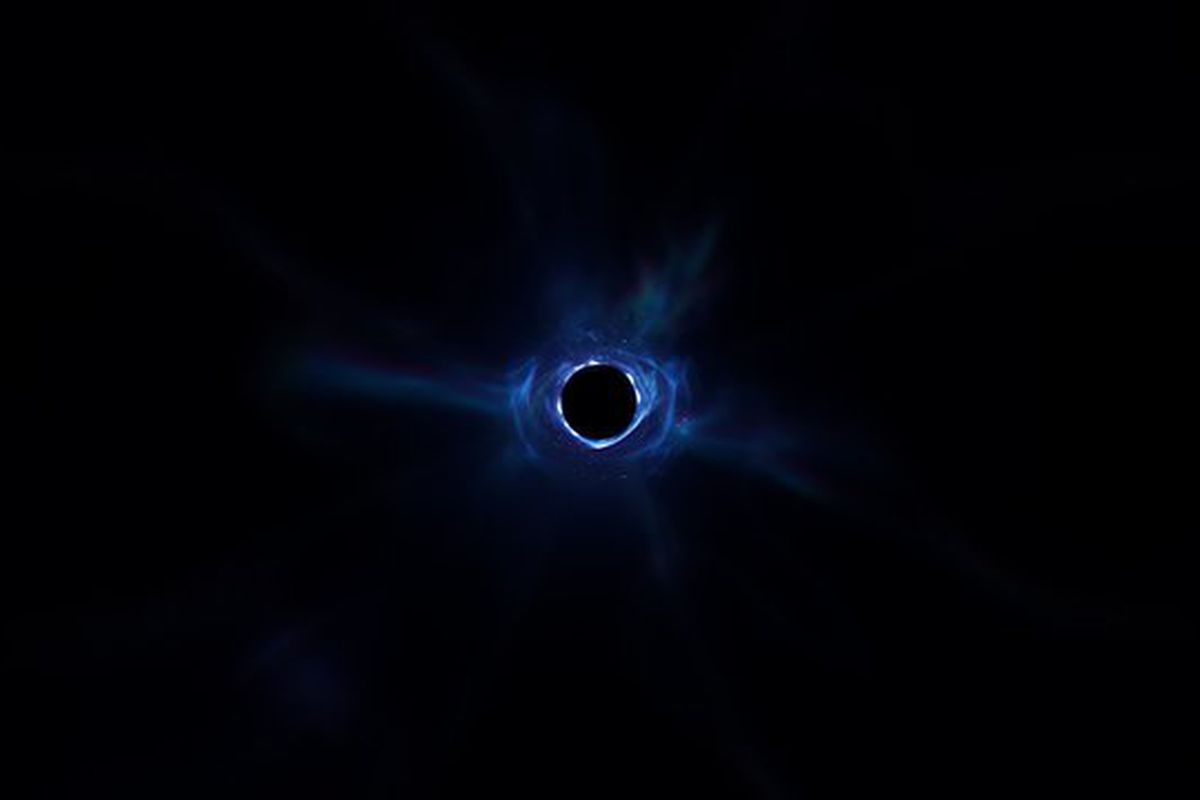 When the black hole left us, everyone was shocked by the changes – there was a whole new map, new mechanics, new Battle Pass and a whole new Chapter. But, of course, the players always want something new, and the developers are still constantly trying to add new items and mechanics to entertain the players and make the game more fun.

Chapter 2 might be also coming to its end, no matter how scary it might sound. Many popular data miners think that Season 8 is the last season in Chapter 2. 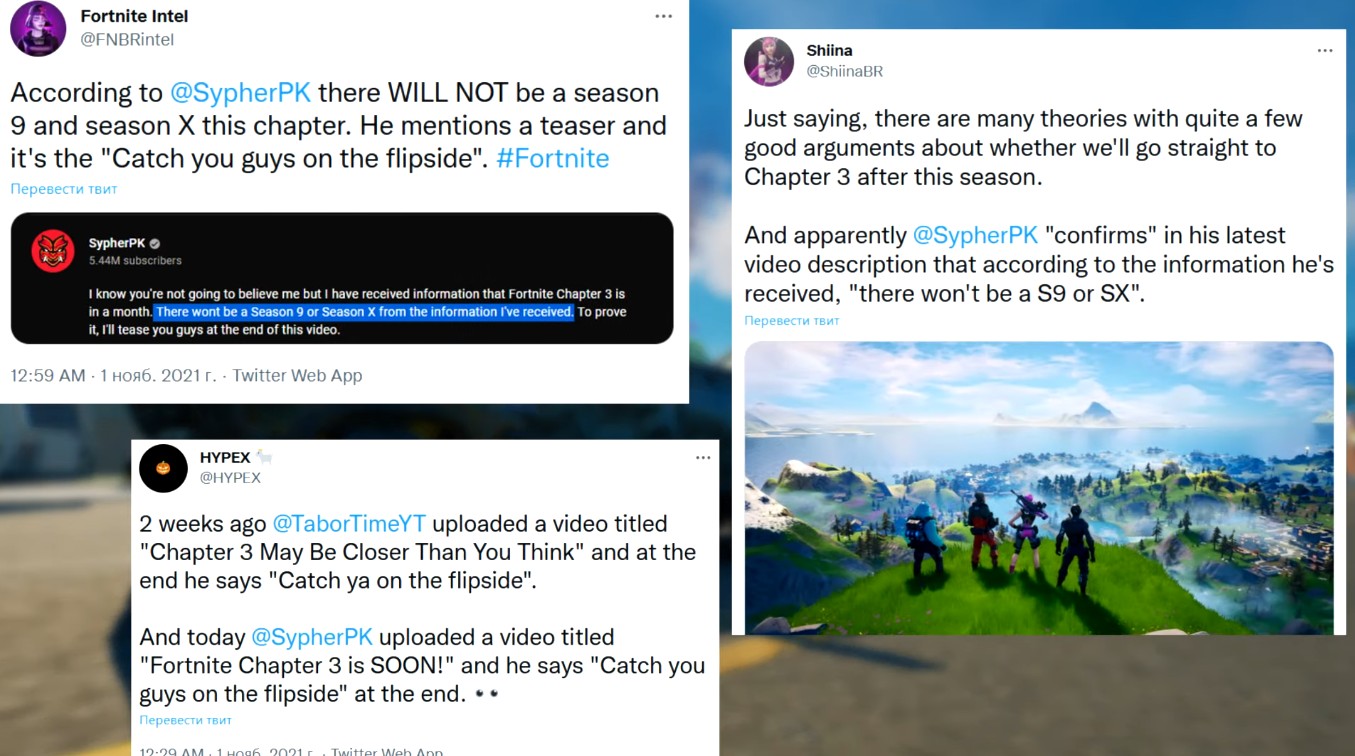 They all refer to SypherPK, who received some sort of information about Chapter 3 of Fortnite.

According to him, the new Chapter will start in a month, and the “Catch you on the flipside” quote is almost a meme now.

You can build hundreds of theories about it and add them to the hundreds that already are created by the community. Someone noticed that Donald Mustard don’t talk about the next seasons even though they were before, and someone found a line about Chapter 2 Season 9 in the Fortnite Crew terms. 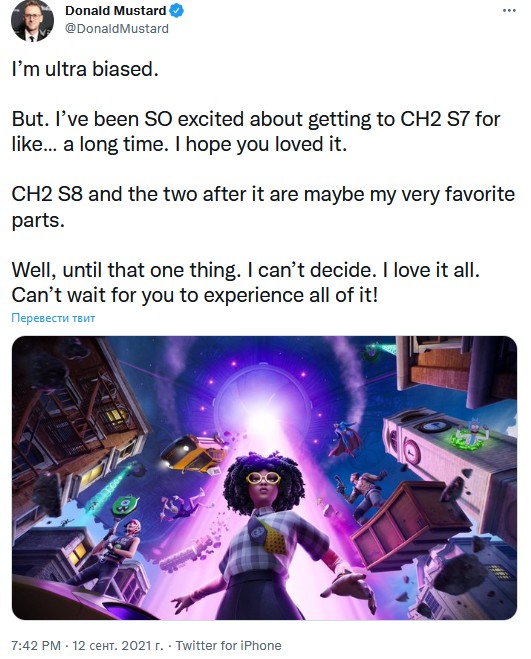 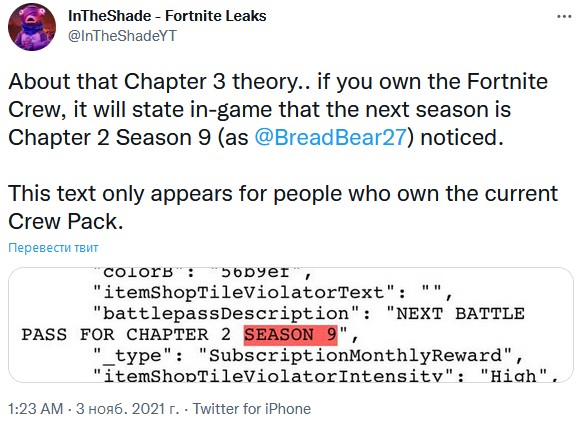 The files have some signs of the ongoing work on the Chapter 3 map. Its code name is Artemis:

Artemis is the codename for the Chapter 3 map!

Besides then, the To Be Continued screen that we saw in the end of Chapter 1 got updated:

It appears we will be going “Night Night” this season with two strings:

– Game Update Available
– An update is available. Please close the game if you are ready to install the latest update.

Night Night is the codename for the “to be continued” screen.

Also, the data miners tell us that the game’s servers will be off for 2 days. Usually, the blackout between seasons lasts for around 10 hours.

As for the final event, it’s called The Chapter 2 Finale. Obviously, this name doesn’t need any explanations. 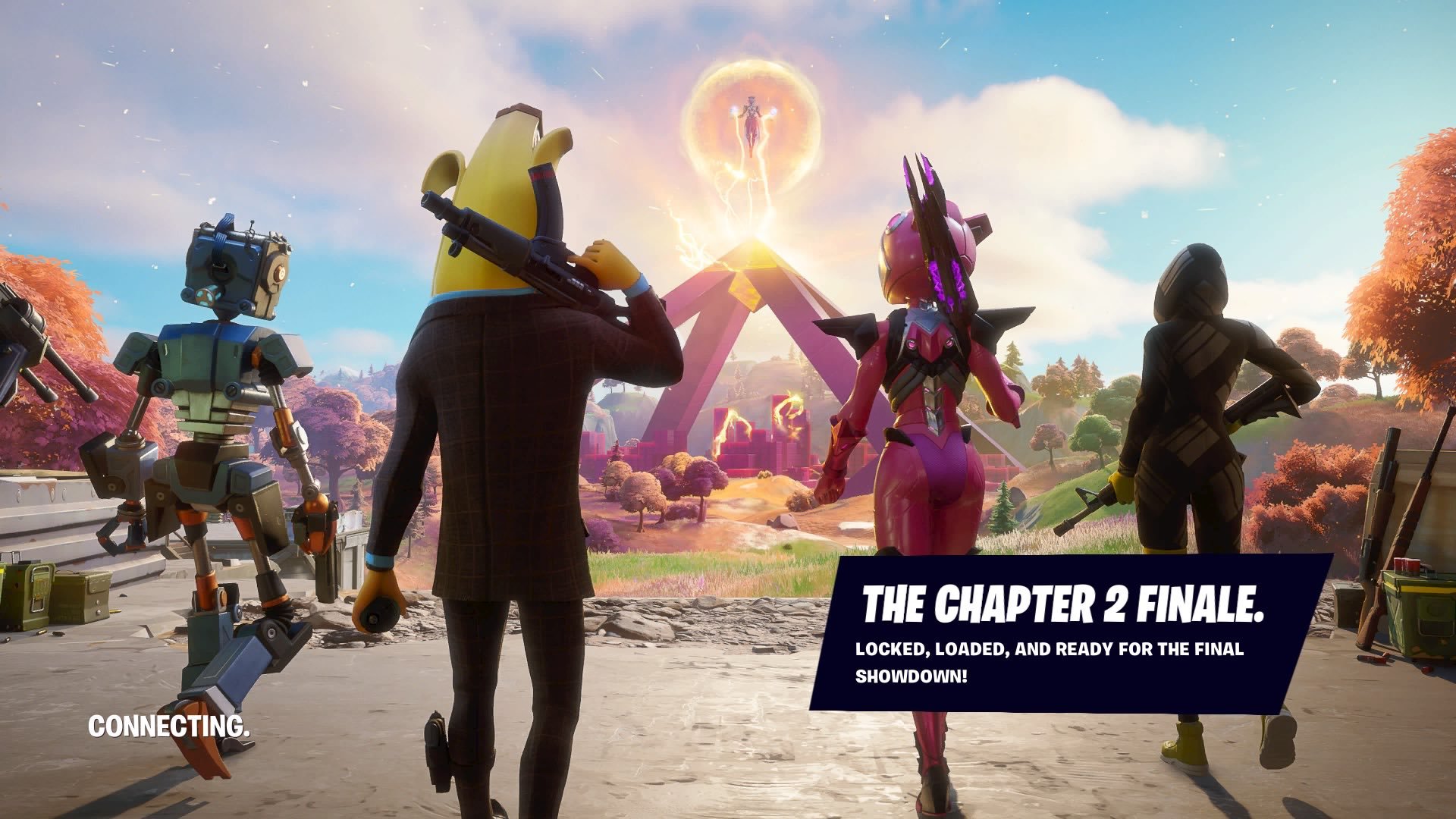 What will there be in Chapter 3?

A while ago, Reddit users noticed an insider who told a lot of truth about the Future thing ins Fortnite. Almost all of his predictions have come true, including Ariana Grande’s concert, partnership with Naruto and the Cubes. The only thing that we don’t know anything about yet is the Chapter 3 information.

According to the insider, Chapter 3 will have a brand-new map. The amount of locations isn’t specified, but he says that the location of The Seven will become known to the players. 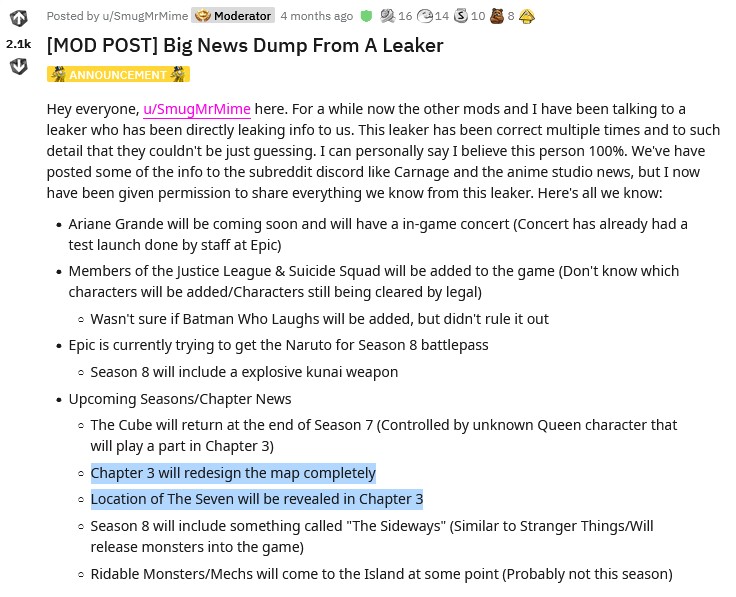 And if we forget about the insider leaks and remember about logic, the new map should also have a snowy biome. Christmas and New Year are coming, and the map should become snowy, as it did in the past.

A concept creator made his own version of the Chapter 3 map based on the leaks above: 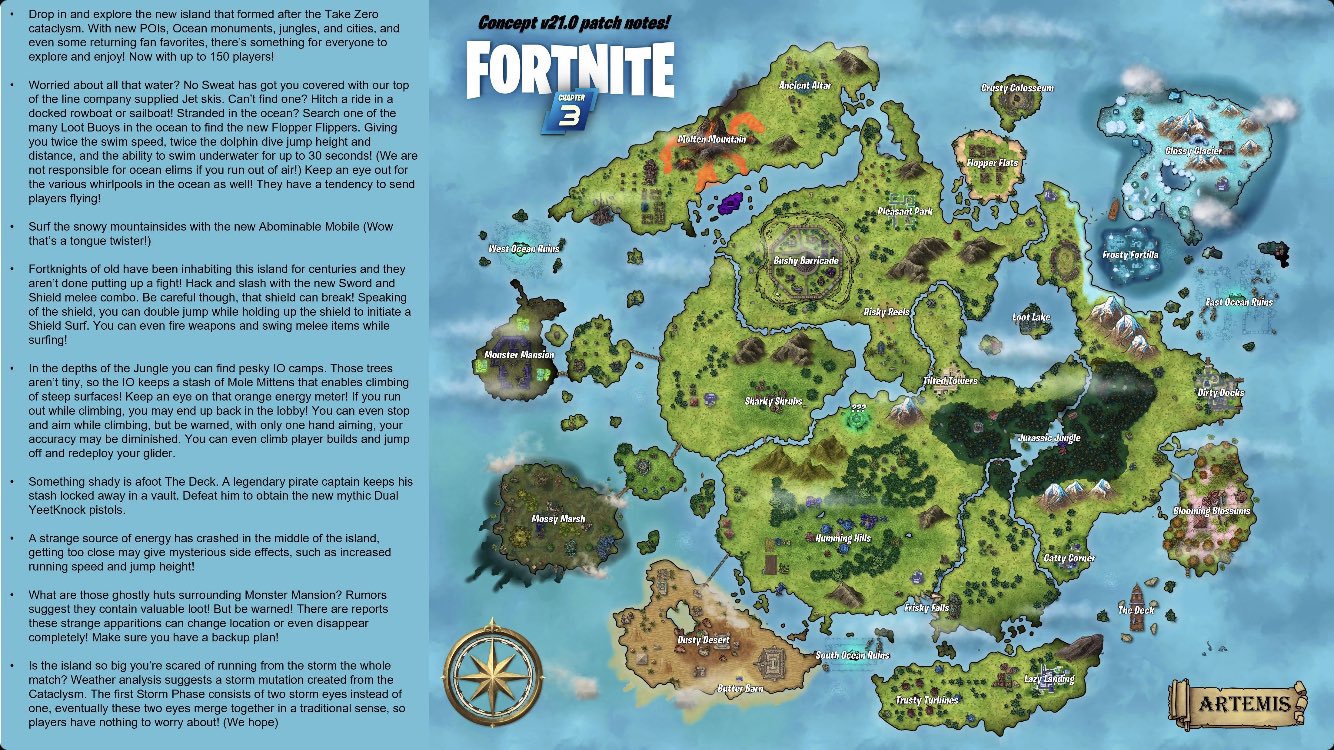 It became viral, and people think it might be true because of one of the developers’ pictures. The author either knows something about Chapter 3 or thought about everything – on his map, Tilted Towers are located next to the mountains we could see on one of the official pictures.

I saw the recent theories. And tbh I wouldn’t even mind if this was the Chapter 3 map. A lot of uniqueness but without the clutter, since the biomes and such are separated

(The multiple islands concept are kinda weird but oh well)

If Chapter 3 really starts in a month, we might see the new map by Christmas and New Year, which can be quite terrifying for all the content creators. 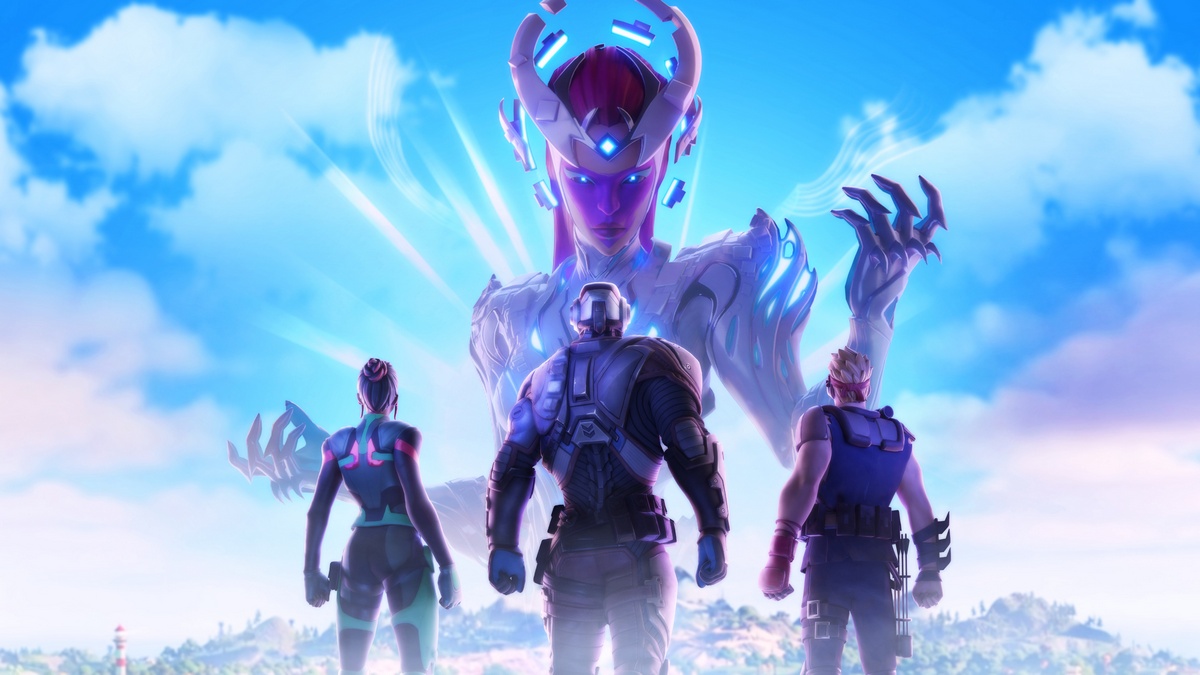 It’s also interesting to see how the end of Chapter 2 Season 8 possibly can start Chapter 3. Obviously, the cubes and The Cube Queen are involved, as well as the main Fortnite story trio. We also already know what will happen to the center of the map, you can read more about that HERE. We also don’t really know a lot about The Foundation and The Seven, so that’s another question that doesn’t have an answer.