Yesterday, a lot of players received a letter from Epic Games asking to fill a survey, which consisted of different Fortnite skin concepts. We’ve already seen something like this, and a lot of skins from the last pack actually got developed further and became real skins. This time Fortnite might get a Toon Peely skin, a new Lynx version, new Frozen Legends and a few original ideas.

The concepts from this pack are really different, and they contain pretty much all sorts of styles: Japanese skins, stylish female skins, soldiers, cute animals and even something extra.

There are 65 concepts in total, and at least 50% of them deserve to get added to the game right now. But let’s look closer at the artists’ creations. 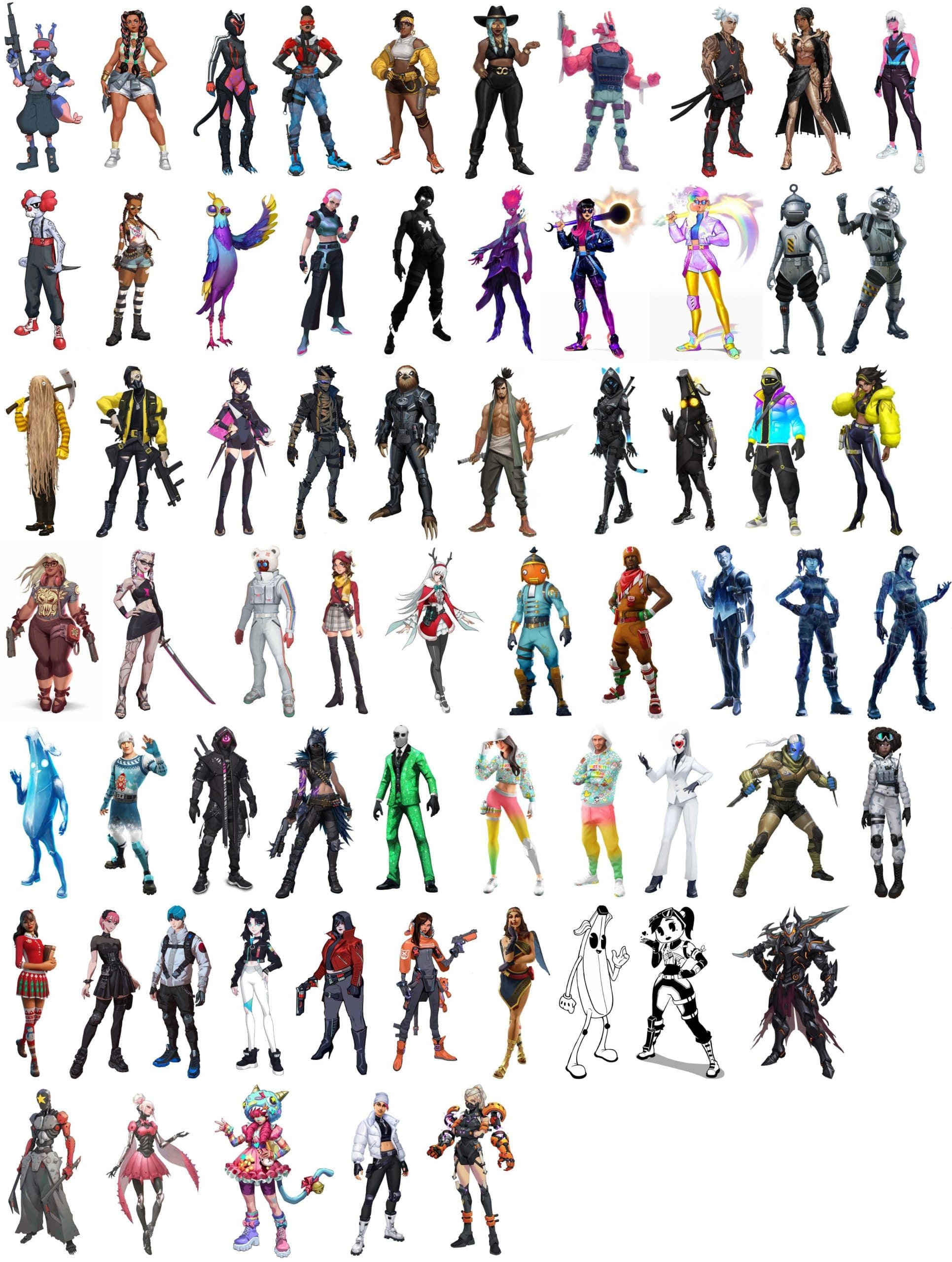 New Lynx and a pink llama

The first ten has some familiar faces in it – one of them is a brutal pink llama with bandages and a bulletproof vest. The skin looks quite nice, but I don’t think it will have a lot of fans due to its size. Another interesting outfit is a plush special forces soldier wearing a fox costume. Isn’t it cure? Here we also have a skin that looks like a new version of Lynx, who has decided to become a racer. The last few skins are a samurai outfit, a western princess and a neon girl.

The next ten skins’ unique feature is the scary killer clown skin. He might not be that scary in-game if the skins gets added, but it’s still a little creepy. And if you’re a fan of more funny skins, threre’s a parrot that somehow looks like something between Peely and Fishstick. Then, there’s also a great version of Dream in the style of Shadow legends, which I think a lot of players would purchase. There’s also a female underwater creature, a fancy girl with two styles, and mechanical versions of Fishstick and Tomatohead. Fishstick might have a bad time trying to swim in such a suit.

The further we go, the better the skins are. The third ten has the most important concept – a cyberpunk version of Lynx, which is the coolest thing ever, so it will most likely be added to the game. There’s also a Peely version in a similar style. Besides them, there’s also another samurai with a mechanical hand, an anime girl, a couple of skins wearing masks, a battle sloth, and a mummy. There’s also a new style for Cryptic, a girl wearing a Pikachu fur coat and someone’s old ramen.

The next arrangement doesn’t have as many new outfits, as there mostly are just new reskins for some outfits that already exist. There’s a Crackshot skin in the style of Fishstick (or vice versa), so there’s a chance that these characters actually know each other. There’s also another gingerbread trooper, as well as a new mysterious pack with Midas, Crystal and the third girl. All of them are made in this dark style, which looks similar to Frozen Legends. There’s also a new Skye version, a Christmas anime girl, and a few other skins.

Frozen Peely and a female version of Wild Card

The next ten has a Fronen Peely, which may be hard to eat, a Christmas Jonesy version and someone looking like Slone wearing winter clothes. But the main thing here is a new female version of Raven, a female version of Wild Card, a pair of colorful skins (including a Ruby reskin) and a new version of 8-Ball, if someone still remembers that this skin exists.

Here we mostly have defferent anime skins, a Christmas version of Isabelle, a human version of Stoneheart, Toon Peely and Ramirez and an extremely cool version of Omega. If you liked Chapter 1 Season 4, you will most likely also like this Omega style.

And the final skins from this huge pack are a robot, a pink cyborg lady, a colorful princess with a huge hat, a stylish Ramirez version, and a unique girl with mechanical hands.

Finally, we’ve looked at all the skins from this survey. There are some cool outfits, some more regular ones, and some that might look worse than the rest. However, this is a survey, so we’ll see which skins will be added to the game. The anime skins, as well as the Toon Peely and some other concepts will probably be the most popular, but I hope Fortnite will also get something unique besides the reskins.