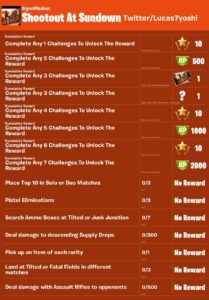 Fortnite Shootout At Sundown Challenges – tasks timed to coincide with the emergence of a new location “Tilted town”. A series of challenges is filled with simple missions and should not cause any difficulties. The only question that may arise is, “What is the Town and where can I find it?”

The Shootout At Sundown rewards will undoubtedly help you upgrade your Battle Pass a bit, so don’t miss this chance.

For obvious reasons, placing into the top 10 in duo is much more realistic than in solo. However, there is also difficulty – since they often play in pairs together, when you are detected, the enemies are unlikely to calm down until they eliminate the threat in your face. In addition to this, there is B.R.U.T.E, which is actively used in this mode and leaves no chance for single people.

The strategy of hide-and-seek is suitable for both single and double battles, since if you move actively, it is easier to notice you. Better choose a discreet skin and fly out of the plane last, immediately opening the hang glider. As soon as you reach the center of the island, a circle will be visible and plan your route based on it. Personally, we love to land on a tree in the zone, wait for a circle and move along with the storm.

To Place Top 10 in Solo or Duo Matches you need 2 times.

Wild west, pistols, crazy rodeo. Except the latter, everything is in the game, so you should not imitate the golden years of daredevils. For two pistol eliminations you will need a few rounds of ammunition, a gun, which, however, is not difficult to find (there are always a lot of them on the floor) and a team rumble. Try to be higher than the enemy and shoot in the head, so it is unlikely that someone will take your blood kill. With sufficient desire, the gun works at long distances, experiment!

There will be no advice and guidance in this trial, for here – he who did not have time is late! But based on the available locations, it is better to land in a landfill, because it is removed from the action disgrace and will give you a chance to collect at least a few boxes. In the first location, even without a test, an abundance of enemies who, without the ability to build, manage to shoot right and left.

You need to search the ammunition boxes 7.

Supply Drops have been familiar to us for a long time. They are marked on the map with blue boxes, and they themselves land for a long time. Therefore, taking an automatic rifle or even leaving a pistol from a previous mission, you will successfully deal required 200 damage. Didn’t work for the first time? Do not worry, during the game you will have many more attempts, the main thing is to observe the changes on the map. 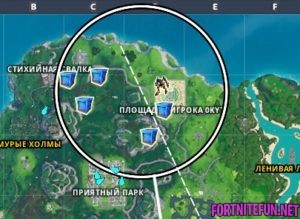 Pick up an Item of each rarity

As you know, there are 5 different categories of rarity in Fortnite. In this assignment, we need to Pick up an Item of each rarity. Remember that items do not need to be stored in inventory, you can pick up and immediately throw them away. The main thing is not to get confused, what a rare object you have not yet raised. The mission is easily completed in the mode of “Team rumble.”

Land at Tilted or Fatal Fields in different matches

Epic Games once again show players interesting points on the map, but at the same time provide a choice. If you do not like the wild west and the lack of construction in Tilted (located on the site of the Neo Tilted), then land at Fatal Fields. However, we recommend that you take the opportunity to look at a new, unique location, especially since you need to land in only 3 different games. And there you will not have time to look back, as Fortnite without construction will drag you in!

An assault rifle is the most popular weapon in Fortnite, it is present in every game for any player who has managed to get involved. Infantry or heavy – the choice is yours, shoot at enemies and score 500 damage. Killing is optional – the main thing is to hit. Best to complete this quest in team rumble.