Fortnite Spray & Pray Challenges unceremoniously burst into our fortniter’s life and consist of very difficult tasks! To complete them, you must either have a striking visual memory, or intuitively understand the objects on the map! The latter, in principle, is not difficult to do, given that after updating Season 10, the map has not changed much.

All challenges of “Spray & Pray” series consist of simple actions (for example, spray or visit), but in unusual places (for example, at the fountain). For the consistent execution of 14 challenges, you can get many battle stars, experience, back bling, spray and style for the Tilted Teknique outfit. For completing all the tasks, a currently unknown reward is given.

The rewards for Spray & Pray challenges will delight all buyers of the battle pass, because there is plenty of experience and cosmetics! 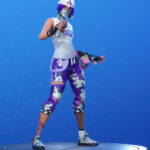 Deal damage with SMGs to opponents

Damage is a beloved and irreplaceable thing, so without it anywhere! And it doesn’t even matter what you do damage, because the main thing is to inflict. However, in the context of this assignment, your task is to accumulate damage exactly pp. As practice shows, the best option for you would be close range fighting (since the bullets of this weapon have an extremely chaotic spread) and shooting in the head.

Spray a Fountain, a Junkyard Crane, and a Vending machine

You can take a look at the cheat sheet of Spray a Fountain, a Junkyard Crane, and a Vending machine now and take advantage of our full guide.

You can see the location of gas stations now, and a more detailed guide read here!

Lost Spraycans are located on the map at 5 different points. To find them, follow our map. Also, here you can see detailed notes about this challenge.

Deal damage to opponent structures with a Minigun

Time passed, and only locations and … minigun remained unchanged. It is better to search for it at the beginning or middle of the game, when supply boxes are available. There, the probability of falling is higher, and the rarity is mostly legendary. Do not forget to stock up on ammunition before this significant action, because it is necessary to deal 3000 damage to opponent structures with a minigun! We advise you to start shooting at buildings when 60 ~ 75 of the dead were gathered, because by this stage of the game, buildings are already everywhere. However, your match may not fit into our statistics, so be guided by the situation.

Do not forget to share the minigun with an ally or opponent!

Eliminate opponents with an SMG less than 15m away

Eliminating opponents with an SMG less than 15m away is something new! However, there is nothing difficult in this, because the submachine gun is at this distance and has the most accurate and powerful lethal force. Do not forget to stock up on many rounds, because they are used with this weapon unrealistically quickly. For best results, shoot headshots of enemies below or at your level. It is advisable to attack

You need to kill 3 people.

Tilted – not neo for a short time, now they have the name “Tilted Town” There are fewer chests from the changed location, but with due luck and perseverance, you can still find there 6 and 7 chests in one or two matches.

You need to search 7 chests.

Eliminations with an SMG in a single match (2)

All the tips that can help you while completing this task are already given above. In short, don’t forget to loot the ammo boxes and shoot at the enemy nearby.

Well, the rest can only hope that you can eliminate with an Smg 2 opponents in one match!

Search Chests inside containers with windows (5)

Searching chests inside containers with windows in this challenge is very difficult! We advise you to play in solo mode in order to have at least some chance of success. You can see the location map below. A more detailed version of the passage you can find here.

This challenge, in comparison with the couple above, is just a gift! Expose your favorite graffiti and go to areas full of cars. This, for example, is a zone of a Mall, a park, springs, a lake, palms. Perhaps the cars in the landfill will also be counted, but since we write in advance, alas, we can’t check.

You need to draw spray on 6 different cars or trucks in different named locations.

And do not break into spite of other car players, because then you can be in their place!

You must visit 2 graffiti covered billboards in a single match. For a more detailed guide, see here.

Damage opponents with a Minigun (500)

Did you miss the minigun challenges? Here we are. However, nowhere to go, to do this for the sake of rewards one way or another will have to.

Eliminate opponents with an SMG less than 5m away (5)

Eliminate opponents with an SMG less than 5m away – is the classic challenge to which we are all used to, but this time in our hands is not a shotgun, but a submachine gun. We go into a team rumble and go in search of smg. We recommend looking for either a Thompson submachine gun or a submachine gun with a silencer, and it is better to have both weapons so that reloading does not cause a lost kill.

The most enjoyable goal for you will be snipers who are sitting on hills, trees or buildings – land them behind your back and start aimed fire at your head. SMG breaks buildings very quickly, so the victim is unlikely to be able to leave, the main thing to remember is that you should sneak up as close as possible so that the distance is less than 5 meters and the task is counted.

Your goal is 5 kills.

Eliminate opponents in Tilted with the Tilted Teknique outfit (5)

Tilted Teknique outfit – Season 10 Battle Pass skin, which is issued at level 23. You need to put it in the locker and start the game. Further, the scheme is familiar to everyone to the disgrace: look for the most comfortable weapon for yourself, fly to the Tilted and eliminate the enemies. Since the density in this location without a challenge is high, we advise you to loot not there, but in some other approximate location. It will be better if the circle in the brawl falls exactly there, then you will have much more attempts.

To eliminate opponents in Tilted with the Tilted Technique outfit you need 5.