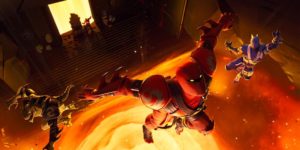 Team Rumble: Lava – Fortnite Battle Royal LTM added to the game files after v9.30 update. This is a leaked mode, so the information presented here was published on plums. A child mode of the usual Team Rumble, only with its own characteristics.

Two large teams fight for the Victory Royale in an action-packed mode where the first team to get the target number of eliminations wins! Dangerous lava rises gradually from the lowest parts of the map. Quickly loot, gather materials, and then start building up to stay away from the lava!

This mode is definitely more dynamic than the original one, because it makes not only fight, but also hide from danger.